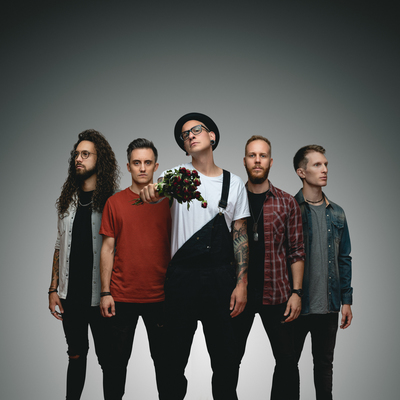 Metal/Punk, Metal, Ticino – Formed in 2006 in Lugano, Switzerland. Since their inception they have never been an ordinary Metal band. Their mix of melody, heaviness and... Read Biography

Formed in 2006 in Lugano, Switzerland. Since their inception they have never been an ordinary Metal band. Their mix of melody, heaviness and uplifting lyrics gained the attention of the modern Rock, Metal and Hardcore scenes.
After the release of their first EP "To The Edge Of Reality" in 2008 they signed to "Spinefarm Records" and then released the albums "What Silence Hides" in 2011 and "The Gift Of Life" in 2013 which features evergreen songs for the genre like "Consumed Future", "Photographs" and "Your Voice".
The band toured continuously and touched 4 continents: Europe, North America, Asia and Africa gaining thousands of fans all over the World.

In 2015 they released "Dreamers Don't Sleep" which was the first single that anticipated the release of a new album.

The band signed with "Artery Recordings Discography" in 2016 and released their album "Vibrant" with songs like "Where My Heart Belongs", "Up All Night" and "It's Over" that feature new influences like Rock, Electronic and Rap music. Album ranked 3rd in US iTunes Metal Charts.
Dreamshade embarked a Headliner tour through all of Europe and Asia collecting also Sold Out shows.

Single Question Everything was released on Jan 15th 2019 and the band started a World Tour through Europe with DON BROCO & Emarosa, South Africa & Asia as Headliners.