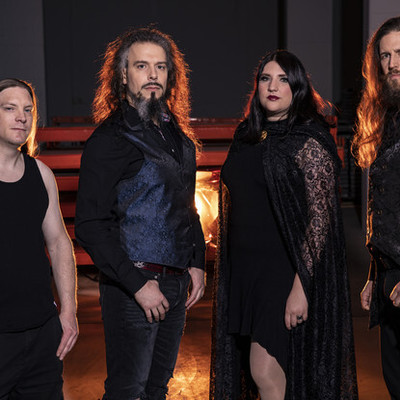 Founded at the beginning of 2017, these motivated Swiss soon found their very own style: Melodic Dark Metal. DREAMS IN FRAGMENTS are an extremely profound artists' association, to which you can hear the healthy striving for serious music throughout. The imaginative and soulful foursome, consisting of lead vocalist Seraina Schöpfer, guitarist Chris Geissmann, bassist Jan Thomas and drummer Roger Häfliger, comes from the otherwise quiet town of Wangen near Olten between Basel, Bern and Zurich. Despite existing parallels to well-known genre greats, the participants have no reason at all to present themselves as a cover band, which only plays songs of the established success models.
At the end of June 2019, DREAMS IN FRAGMENTS presented their sonorous and singing debut album "Reflections Of A Nightmare" to the world of heavy and yearning sounds. Seraina's completely natural, pleasantly unaffectedly celebrated voice, often discreetly operetta-like and yet light as a feather, co-operates on "Reflections Of A Nightmare" in a balanced way often with Chris' beastly growl. This kind of performance distinguishes the band from the mass of competitors in the same way as the combination of hard guitar riffs and dreamlike orchestrations does. The follow-up album, entitled "When Echoes Fade", saw the light of day in 2021 and not only continued the success of the first album, but also improved on it. Since then, the songs have been a permanent part of the band's live package.

Registered since about 5 years
Last login on 5 October 2022