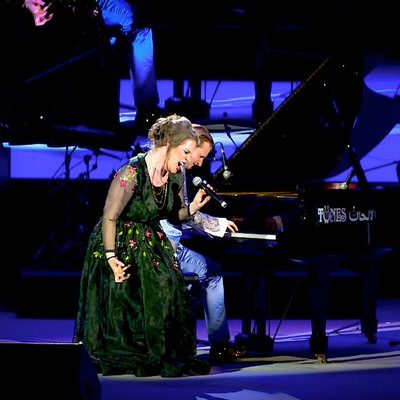 Opera Pop, Luzern – The duo “Dust of Soul” is formed by the Basel Singer “Dusty” and the Lucerne-born Pianist “MiKey”. Dusty’s powerful and distinctive voice and... Read Biography

The duo “Dust of Soul” is formed by the Basel Singer “Dusty” and the Lucerne-born Pianist “MiKey”. Dusty’s powerful and distinctive voice and MiKey’s engaging piano performance excite with their style: “Opera Pop”. All the songs were originally written and musically composed from the life of both artists. They tell stories of friendships from all over the world. But also on the daily challenges that surround us. And most importantly, never abandon a dream.
The musicians convince not only with their songwriting in the traditional sense, but also with their talent to create new songs live on stage. This creates a never before experienced closeness between artist and audience.

Dust of Soul appear internationally as a duo. For the past seven years, 10 countries have been on their tour schedule (USA, Switzerland, Tunisia, Italy, Germany, France, Turkey, Oman, India, and Liechtenstein). After starting with their music career in Lucerne in July 2012, Dusty & MiKey were living in New York City for half a year to get to know each other better as artists and collect first experiences in performing together as a duo.
With a growing community on social media, 200’000 fans have led Dust of Soul to various exotic countries: 2013 to Tunisia, 2016 to the Sultanate of Oman into the Middle East, and 2019 to India.
The highlights of their musical career are the shows in the “Teatro Dal Verme” opera house in MILAN, in the NEW YORK concert hall “W. M. P Concert Hall”, the well-known and prestigious Swiss castle Château Gütsch in LUCERNE, the spectacular ice “Live on Ice” field as in ZURICH, the historical “Acropolium de Carthage” in CARTHAGE, Tunisia, and the MTV India Bollywood stage at “City Amphitheater Qurum” in MUSCAT, Oman.

In November 2018, Dust of Soul received an award from the “Girija Baqer Art Foundation” for their contribution to the world of music.