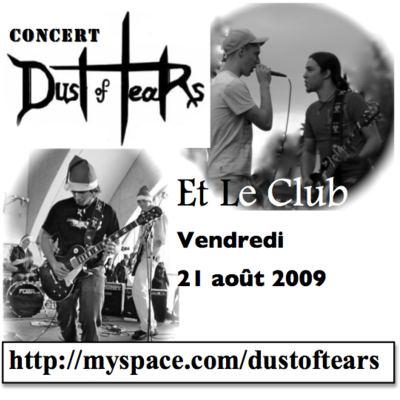 Dust of Tears (CH): Year 2005, Pak Wan met L'Esko, and with guitars and drums, a band was born. They began to play punk rock, metal, ska, and a little bit of hip-hop, and funk and especially progressive rock.

Some say DoT's such like punk music, we agree also... But it's kinda hard to select only one music's style for our band, because each of us has a lot of different musical influences, from trash metal to hip-hop, through political and spiritual engaged music.

All we want to, is to play a rocking music that could make people feelin' good, also to give'em a message, and to take pleasure by ourselves. Our lyrics are inspired of our lifes, experiences and our faith. A high music, fun and nice to hear... and more.

Since its creation in 2005, DoT begins to have bigger shows and a cool fan's support. The band is now going to record the 1st album.....

Registered since about 15 years
Last login on 9 November 2010