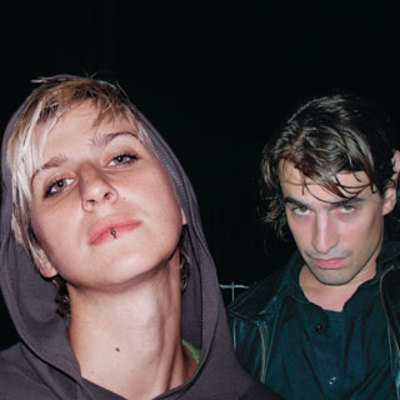 Donovan boasts of an excellent musical background. Already at the beginning of his career he worked with renowned musicians like Matthew Ashman (Adam & The Ants, Bow Wow Wow), Rams (The Bucks) and Tom Fischer (Celtic Frost, Apollyon Sun). But it was always Donovan‘s aim to develop his own project. Aleksandra completed his vision and the fact that she is also a choreographer, pushed the enterprise even further, as they both did not want to be limited to a music band project only.

Aleksandra was first noted as a choreographer in 1999 (while still completing her dance education) when she won 3rd prize at an international choreography competition in Paris with her dance piece “Veins”.

After their formation, Earthphish recorded five songs, published them on their homepage and were showered with positive comments from around the globe. In the same period they founded their dance company, Earthphish Dance and within a short time created two dance pieces. The first piece “If I had a child”, was awarded the “Swiss Premio Furthering Prize” and won second place at the “International Serge Diaghilev Competition of Choreography Art” in Poland. “Beyond Henry”, their second piece, was lauded as a “dance masterpiece” in the local press.

The affirmative feedback prompted composer Donovan and singer and choreographer Aleksandra to continue their project with even more enthusiasm. The musical debut album “Soft Green Exit” was released end of 2003. It is an unusual collection, thought provoking, dark (in a way) and exploratory.

Earthphish is gaining worldwide recognition. Their song “Soulcandy” reached #1 in the electronic charts on the international music platform www.GarageBand.com. The track “Complicated” was selected to be part of the Levi’s Compilation “A Drop Of Swiss Sounds”.

June 2005 saw the premiere of “Elephant Man”, Earthphish Dance‘s new choreography. It is inspired by the movie “The Elephant Man” directed by David Lynch. The choreography about the true story of Joseph Carey Merrick had a strong impact both on the audience and the media and turned out to be a great success.

August 2005 – Earthphish Dance was invited to create a new dance piece for the International Dance Festival “Coimbra Dança” in Coimbra, Portugal. The piece “Cut Down” concerns the microcosm of the stock market.

Registered since over 14 years
Last login on 16 November 2006