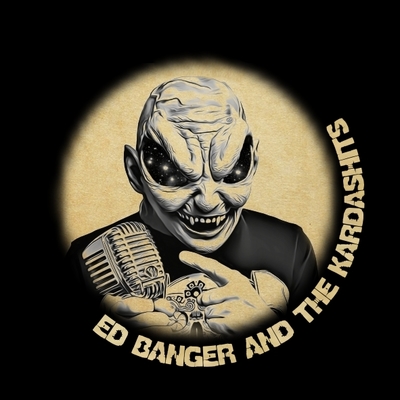 ED BANGER AND THE KARDASHITS

Rock - Hard Rock - Pu..., Geneva – EP OUT THE 26 MAY 2021 - THE ED BANGER STORY : Let us tell you the story about the Space Pirate Ed Banger and the Kardashits. Coming straight... Read Biography

Let us tell you the story about the Space Pirate Ed Banger and the Kardashits. Coming straight from the Tanqua’puv galaxy, he wanted to take a short cut through the closest wormhole he found… The earth he thought had been destroyed by humanity was still there and he didn’t have time left to pull the brakes… a crash later he discovered that the only joys left on earth were rock’n’roll, alcohol, sex, video games and Star Wars. What else do you need ?

Mixing musicians from several major Geneva bands (Christian ‘Indy’ Inderbitzin from ‘Rattlesnake’, Bourreau also known as Bison and Seb from ‘Cosmosonic’, and Fred from 'Danila' and 'The Trap') the band wanted to return musically to the very essence of the term “Rock” taking its main influences from bands such as The Ramones, Misfits and Motörhead.

More than a simple musical project, Ed Banger and the Kardashits is a global concept. Coming from the imagination of guitarist Indy, Ed Banger is as much a musical project, as Comic books describe our society and its shortcomings through the eyes of a being coming from another planet. Ed will tell us pieces of life slices of our reality without taking it too seriously, the Kardashits serving him as a medium to convey his stories.

From his arrival on earth, to the discovery of New York, from his first Star Wars to his first love and its unfortunate consequences, all this and much more will be disclosed by following his adventures both musically and visually

Registered since over 1 year
Last login on 5 April 2022