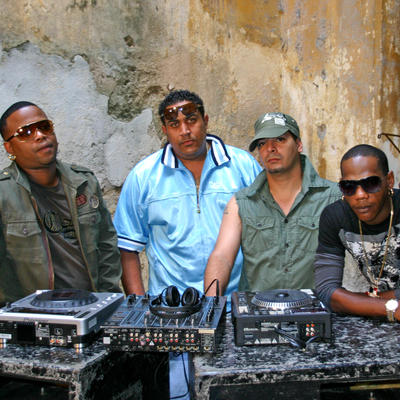 Hip Hop, Luzern – Eddy K has set the standards for the young, new music generation of Cuba. He is the CUBATON ambassador par excellence. 2007 has become one of the... Read Biography

Eddy K has set the standards for the young, new music generation of Cuba. He is the CUBATON ambassador par excellence. 2007 has become one of the most successful years for him and his band. He has landed top hits in Cuba with songs like "La gente que me quieren" and "Llegaron los salvajes". His latest song "Amigos" is a calm, intensive song and is dedicated to the endless love towards music.

The band Eddy K got together already in 1997, but Eddy K (Eduardo Mora Hernandez) himself joined the band not until 2000. At the beginning, the band only played rap cubano which turned the four musicians into local heroes. Next to Eddy K, the band is compiled with Jorgito (Jorge F. Hernandez), Deep Drama (Damian Aguirre) and DJ Tony (Jose Antonio Suarez). Eddy K took part at many festivals all over the islands and 2003 celebrated a huge success at the urban festival in England. In the past couple of years, the band has matured and is now influencing the present-day Cuban music generation.

In 2006, Eddy K could celebrate his first success on MTV Latin. The same year he received three nominations from the Festival Cubadisco. The duet "Entrale" climbed to the top of the Cuban charts. In addition to playing music, Eddy K and his band are strongly engaged in AIDS and Cancer campaigns.

In fall 2007 Eddy K and Cuba's seven hippest top bands will be brought together to work on the "CUBA presents - CUBATON" project. Every single one has been putting in a great amount of work and effort to make this project come to light to present the new generation of cuban music outside from Cuba. For the first time ever, Atena Music and Topaz Sound has gathered the most important band members to create the first video clip "Amigos" by Eddy K. Even Cuba has rarely seen such a historical and musical event!

Registered since over 14 years
Last login on 27 January 2008