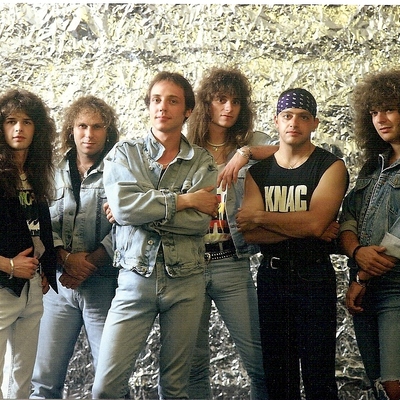 Rock, Geneva – The 6 members of the band’s original line-up met one day of 1990, and, sharing the same passion for what was called "melodic rock", performed in... Read Biography

The 6 members of the band’s original line-up met one day of 1990, and, sharing the same passion for what was called "melodic rock", performed in these times, among others, by bands like Giant, Europe, Yngwie Malmsteen MSG etc…, decided to start playing together as a band.

However, in 1991, came the rise of a new movement, the so called “GRUNGE”, which deeply modified the rock world, sending Melodic rock dinosaurs to the outer space, for the benefit of bands like Nirvana, Alice in Chains and other Soundgarden.

It is in this context that the freshly recorded Edge’s first CD “Lady in Blue” (5 tracks), went out to be distributed on the market. Thanks to this CD, Edge got relatively notorious and started touring intensively to promote their record.

Edge eventually won some music contests, and the record was warmly welcomed by the German critiques. But, in 1995, tired of not reaching to wider success, the band finally split up.

Nowadays, with the growing importance of the Internet in people’s habits of communication, and thanks to Websites like www.melodicrock.com , or to recording labels like Frontiers Records (www.frontiers.it), the Melodic rock has made a quite spectacular come back on the scene of the music world. Therefore, in 2007, just for the fun of it, an internet user eventually circulated an MP3 track of one of the tracks from the “Lady in Blue” album.

Surprisingly, the web site of Edge’s ex-drummer and bass player band, Thierry and André, www.gora.ch, got a great number of requests from Edge fans, wishing to acquire the CD.

A bit puzzled, Andre and Thierry, contacted the rest of the band, who were since the early days of the band largely spreaded around in French part of Switzerland, to request their authorisation in order to put on line for free downloading, the rest of the tracks from the album.

Registered since about 14 years
Last login on 15 November 2009