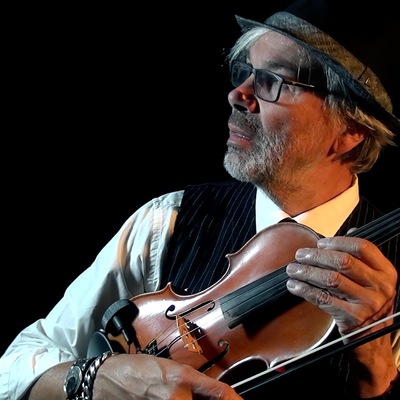 Worldmusic, Aargau – Egon Egemann, Mad Manoush’s inventor, violinist and frontman was born near Graz with the roots of a hungarian grandfather. In his early years he... Read Biography

Egon Egemann, Mad Manoush’s inventor, violinist and frontman was born near Graz with the roots of a hungarian grandfather. In his early years he was already influenced by the music of Django Reinhardt and Stephane Grappelli, whom he met personally in New York during his stay in US in the seventies. A few years later Egon got under the spell of New Yorks Gypsy Punk Scene where he found the main inspiration for his creative way to Mad Manoush.

In spring 2004 Egon attends the Django memorial in Augsburg, Germany and meets Gypsy-jazz icon Robin Nolan. Thrilled by Egons revolutionary idea of a mix between original Gypsy Jazz combined with modern components, Robin spontanously decides to engage the project. The result of the two “borderliner musicians” work is the song “Django” which is also realized as a videoclip. Mad Manoush is born! A new, exciting style of music, that creates a fresh, spicy taste in the scene of world music – performed on stage in a high energy show. With the Debut Album Gadjo Mad Manoush enters the Top 20 of European Worldmusic Charts. 2009 the second album “The Gypsy Revolution” reaches Top 10 of European Worldmusic Charts .

"Be always open minded for new and innovative stuff" - Following this Motto, Egon Egemann continued improoving his skills and developed fascinating, revolutionary techniques on his signature 6-string violin. With his stunning and unique "Choping" - bowing Egon fills his audience with enthusiasm and inspires many violin players all over the world.
Typical of Egon to explore the unknown, he has come up with a unique and energetic style of playing the violin. His latest project "Manusch_ Father & Son"(Egon Egemann Violine, Sascha Lackner Gitarre), is crossing the borders with a down-to-earth groove. It is a mix of Jazz, Celtic , Balkon, Klezmer, Alpine folklore and Latin America music with Egon’s new driving violin style. It catches your heart , your soul and the spirit of dance. The concert show highlights the ensembles versatility and the individual musician’s virtuosity and is a colorful variety of music with passion from all ends of the globe.