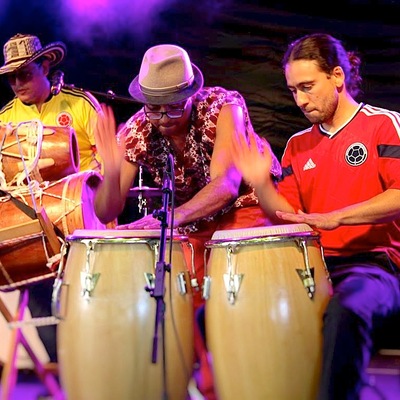 World, Vaud – El Cabildo is a young band created in 2016, with the intention of disclosing the magic and joy of the Colombian Pacific music. Bringing together... Read Biography

El Cabildo is a young band created in 2016, with the intention of disclosing the magic and joy of the Colombian Pacific music. Bringing together musicians with long experience in Colombian, Latin and Afro music, she participated in several carnivals throughout Europe, representing Colombia. Its members also have a long trajectory with orchestras and Latin American music groups. The Colombian Pacific music known as "The Currulao" has remained for a long time a mystery of which only the heirs of African slaves know the secrets. In the last 10 years alone, this music has become popular among the general public in Colombia. The magic sound of the marimba de chonta, heiress of the Mandingo heptatonic balafon, mixes with drums "el bombo" and "el cununo", idiophone percussions "el guasà", and the songs of Indians and Africans, creating magical atmospheres And mystics little known in Europe.Arcadio Lopez, leader of the group, has lived in Switzerland for several years. He learned his main instrument, the Marimba de Chonta (Afro-Columbian Pacific heptatonic xylophone) with maestro José Antonio Torres "Gualajo", currently the greatest master of the marimba. He has also studied Afro-Colombian and Cuban percussions. Felipe Román has been studying Afro-Colombian, Afro-Cuban and Mandingo percussion for 15 years. He has played in several Colombian, Latin, rock, Mandingo and Andean folk groups. Jorge Lopez has been studying Afro-Colombian percussion in the Pacific for several years. Omar Zabsonre, born in Burkina Faso, is a drummer and percussionist. He has a long trajectory in traditional Burkinabe and Congolese and Latin American groups, Leonardo Ponce - percussionist - Theater

Registered since over 5 years
Last login on 29 November 2019