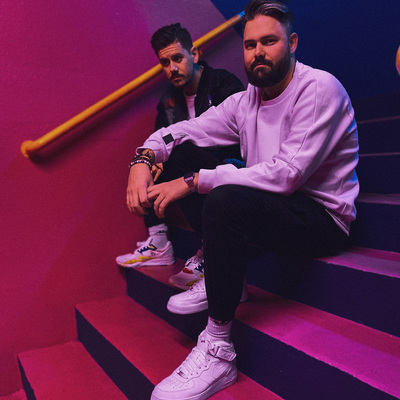 Electro/Hip-Hop/Alt-RnB, Vaud – ELEVNS are the brainchild of producers, Gramm and Aurelian. Over many years the duo were brought together, first as teenagers growing up in... Read Biography

ELEVNS are the brainchild of producers, Gramm and Aurelian. Over
many years the duo were brought together, first as teenagers growing
up in Switzerland, then in London over various music projects. After yet
another chance coupling, guitarist (Gramm) and drummer (Aurelian)
inevitably decided to properly join forces combining and developing
their respective talents into something much greater and becoming
ELEVNS.

Their self-released debut single “Let Me In” released in 2019 was
immediately selected amongst several Spotify playlists including -
‘New Music Friday UK’, ‘New Music Friday Gulf’ and ‘New Music Friday
Denmark’. Not long after ELEVNS release their EP “Faces and Places”,
embodying the catchy, diverse and international nature of their
sound.

ELEVNS have been busy traveling between London, Paris, NY and LA
performing and finding artists to collaborate with, including getting
endorsements from companies such as Soundbrenner and ROLI.
Influenced by their joint love for the likes of Anderson Paak, GRADES, J
Dilla, Pomo and Kaytranada, the producers also take inspiration from
innovators and artists such as Steve Jobs and street artist KAWS.

ELEVNS see technology as a means to develop music and creativity -
something to be embraced and unafraid to ignite the joy of new
discovery in the listener.