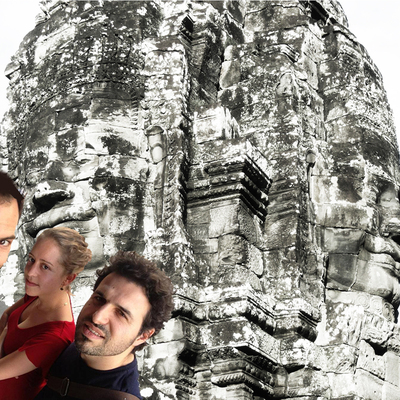 El Fanfaron borned as duo project in order to play with drums (Fabian Wiesmann), singed songs or instrumental music written by guitar and armonica (Mirko Di Lanzo). Then it grows by chance with a third element, a viola (Andrea Müller).
But as a trio, we play also other instruments, in particular melodica and percussions.
Sometimes the great Austrian trumpeter and corneter Sigi Konzett join us in Zurich where we live .

“El Fanfaron” is an hibrid word (between Italian, Spanish..) but in latin languages refers to someone who talks a lot, a braggart, chatty, loudmouth, a big mouth, maybe a bit arrogant sometimes but cause harmless, he knows his weakness; probably an inconclusive then, maybe a looser or maybe a winner keeping dreaming in the reality.

But El Fanfaron can be also mean the big Fanfara, a big band meaning our opening in playing occasionally with new musicians and his different instrument, discovering new hidden personalities of a song and its sounds.

As a modern-day Troubadour El Fanfaron finds himself in several cultural references and behaviours, appreciating the beauty of the different atmospheres coming from all the place in the world and re-interpreting them.El Fanfaron identify itself rather with the cultural richness of this world. His music is therefore a reflection of many approaches, a fusion of imputs and styles.
Its music and singed is getting shaped by emotional expression and a wide range of audible elements, coming not from various music genres only, but from the access to emotions itself. So every times the performances and interpretations of its music are structured but consider the freedom and the uniqueness of improvisation.
El Fanfaron is “one and many” at the same time, several souls, personalities, always someone else, or maybe just the same person with the infinite personalities hidden behind us. Maybe El Fanfaron is a simple human being lost a bit in the perception of this world and in the comprehension of himself, its own dreams, fears and expectations, between drama and irony, between reality and dreams, serious social issues and more craziest and intimate.

There are many different way that make the songs come out as a creative process which is research itself: on music itself, on ourself an souls and on this world. Sometimes the inspiration is leaded by a melody, sometimes by a vision or a landscape which turns into a sonar landscape.
Sometimes from some crazy human feelings, or the desire to express madly something, sometimes from the harmony, a rhythm, a text or just a sentence, a personification in someone else, real or imaginary, ina paradoxical situation, a cultural transposition or a can come form the language which occurs at that moment and shape in a even more peculiar way a personality out of it.

So the songs reflect our society and the metropolitan cultural contamination which could change us and does influence us opening new “views” and meanings. And so the songs born in different languages (in particular Italian, English and Spanish) and are influenced from different colours, lights, musical styles and lifestyles representing all sorts of cultural flavors and backgrounds.
.
A part from a global thinking there are also backgrounds influencing us, for example Mirko's past growing in a restaurant near Rome, in contact always with new different people, from all social spectrum. The restaurant at the end was the big family where appreciate the differences... Like a big comedy scene in a theatre... and now this theatre is the world.

El Fanfaron could performs at concerts, Art or other Festivals involved in collaborations that range from film projects to poetry and theatre.

We are now working on recording our first album within this project.

PS: Previous Work with a trio band www.myspace.com/iprofessionisti
Cd out in 2012: http://skankblocrecords.bandcamp.com/album/i-sensazionali-suoni-cisalpini-dei-professionisti
Here a pillow of a concert with my preview trio band...http://www.youtube.com/watch?v=PIzviC8KAWg