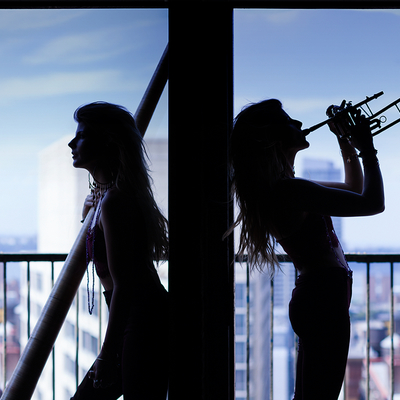 Folktronica / World M..., Zürich – “A young virtuoso who frees the national instrument from its native soil with audacious outfits and a joy for musical experimentation.” –... Read Biography

“A young virtuoso who frees the national instrument from its native soil with audacious outfits and a joy for musical experimentation.” – NZZ

Eliana Burki is among the most successful international representatives of her profession. She’s performed far beyond the borders of Europe, including the United States, South America and the Middle and Far East – and is the most sought-after ambassador of this Swiss national instrument.

She’s played with Talvin Singh, Niladri Kumar, Angelique Kidjo and Beck and as a soloist for the Stuttgart Philharmonic Orchestraand the Munich Radio Orchestra. With her fifth album Arcadia, produced by Christian Lohr and featuring the Solis String Quartet from Naples, Eliana has opened up an entirely new repertoire for the alphorn, combining the lyrical economy of her favorite trumpet player Miles Davis with electronica and influences from folk music around the world.

She’s also the creator of the “Burki-horn”: a brass valve section (what she calls a cross between a French horn and a trumpet) that she can attach to her alphorn, freeing it from its tonal limitations. This means Eliana can use the entire chromatic scale and fuse the archaic sound of the alphorn with innovative, non-traditional soundscapes.

Registered since about 1 month
Last login on 26 November 2022