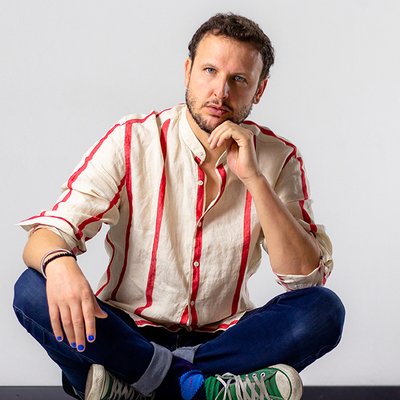 Pop, Ticino – Elias Bertini is a singer/songwriter born and raised in Switzerland and matured in London to be a master of creating “pop miniatures”. In 2016 he... Read Biography

Elias Bertini is a singer/songwriter born and raised in Switzerland and matured in London to be a master of creating “pop miniatures”. In 2016 he reached the radio charts in Germany with the single “Elephant”, a tune from his first solo album “Your Perfume”. It was followed by the track “Wonderful” (2017) which was nominated, in October of the same year, “song of the month” by the major radio stations in Switzerland. “Wonderful” soon became a hit and was broadcasted in Switzerland, Germany and Italy. In early 2018 Elias was back with a fresh, addictive pop song called “Awkward”, created around a bombastic, funky, bass line and the notes of an Indian sitar.
In autumn 2018 Elias released “Farah”, based on a moving, introspective melody.
In 2019 it was the turn of “Bye little world”, a balance between the pop sound that marks Elias’s solo career and the unique identity that he gives to all his creations. The strong will of this artist to explore musical genres from around the world and to put them into his work is also clearly noticeable in the current work and in the songs that will soon be released.

Elias’ career started early: at the age of six he was already studying piano and from thereon his passion for music kept growing. As a teenager he learned to play the guitar, drums, mandolin and bass. Years later he became the front-man of the Swiss rock band “Zero In On” with whom he recorded three albums and one acoustic EP (the latter with Henri Hirsch, Lenny Kravitz’s producer, in New York). In 2014 he decided to leave the rock genre behind to jump into a new adventure as a solo artist. A year later he published his first album called “Your Perfume”. Several songs of this album were included in the soundtrack of “Arthur” (“Arthur 2” is already scheduled), a Swiss television production, winner of the “Web Series World Cup” in 2016. Elias’s music was widely awarded: “Best Score” at the Melbourne WebFest, “Best Score” at the Vancouver WebFest and “Outstanding Theme Song” at the LA WebFest.
Elias made it to the finals at the “International Songwriting Competition” and to the Expertencheck of the Eurovision song contest twice. Together with his band he participated in various contests, such as “ZicMeUp” in Paris. There he was able to gain the title of “Best Swiss ACT".

Registered since over 7 years
Last login on 14 January 2023