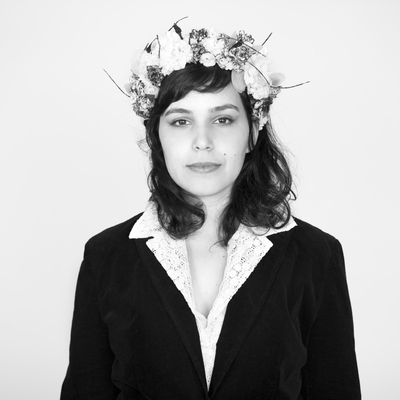 Songwriter and Storyt..., Zürich – Growing up in Tel Aviv, between East and West, Ella was inspired to fuse the American art forms of jazz, blues and songwriting with her own story,... Read Biography

Growing up in Tel Aviv, between East and West, Ella was inspired to fuse the American art forms of jazz, blues and songwriting with her own story, growing up in a reality ripe with contrasts.
A childhood of lazy sunny days at the beach while a war rages on close by, growing up and becoming a soldier who does not believe in armies or guns.
These are the colors of her story, of her songs.
Immediately upon leaving the army she has decided to dedicate her life to music. She has been mesmerizing audiences ever since. Her ability to encapsulate an audience and weave them in to her stories is legendary.
These days she is performing in Israel and Switzerland, where her songs are playlisted on major national radio stations (Swiss RTS1, Israeli Kan 88), at venues such as the Songbird Festival, Waves and the Montreux Jazz Festival, and opening for artists like Emiliana Torrini. A song from her debut album, “Please”, was featured in a worldwide JEEP commercial.
Ella has released albums in both English (Mirror Maze, 2014) and Hebrew (Toska, 2018), and currently spends her time between Tel Aviv and Zürich, working on an upcoming album in English.

Registered since about 7 years
Last login on 22 February 2021