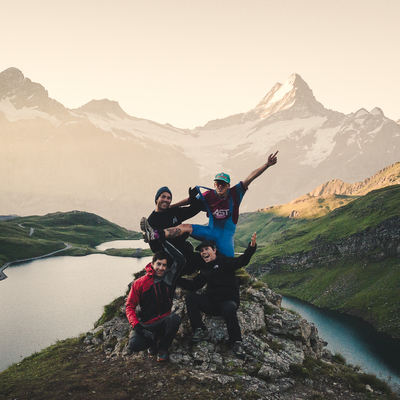 Estelle Zamme is an artistic duo from Neuchâtel composed of Etienne Bel (musician, aka Pavel) and Julien Ledermann (video director and photographer). Defining themselves as an audiovisual project, they create a powerful and jovial electronic music, accessible to all. What makes the group special is to systematically put their musical productions in images, through impressive videos intimately linked to nature and its alpine landscapes. This results in powerful songs mixed with hypnotizing visuals. And this, always accompanied by a slight touch of second degree.

Their first production dates back to 2017 with "Fiston", a single/video clip thought, directed and produced with the help of the main protagonist of the video clip, Dimitri Morand. In a very short time, the video reached more than 10'000 views on YouTube.

A year after its first appearance, the duo was back in 2018 with the title "Don Simon" and its video clip shot this time in the Dolomites, Italy. Once again carried by the public craze and relayed by many media (20 Minutes, SRF 3, Orange Peel, Arcinfo, etc.), this title remained faithful to the first one, as much in its concept as in its distribution model.

This was followed by a break of almost three years without any new release or broadcast of new video clips, mainly due to COVID-19. But Estelle Zamme had prepared in the shadow her return to business, producing "Claude", the third single of the duo, during the summer of 2020. The latter was released on April 14, 2021 and initiated the next step: the new album!

Indeed, after these three releases in the form of single, the time has come for Estelle Zamme to go further and propose a long format. This album, called "Salut Zamme", will be released on May 13, 2022. It is composed of 16 tracks and has many collaborations, including the rapper Senar or Justine (singer of the group Etienne Machine). It is thus an album which widens the musical horizons of the group, mixing electro and pop.