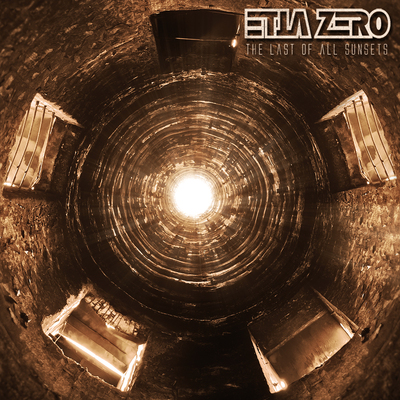 ETTA ZERO: The royal ascension of the Dark Rock phoenix into the last sunset

Take a groovy Rock band, deep and Heavy Metal guitars and combine the whole thing with modern, electronical sounds and a striking voice. The outcome is ETTA ZERO: a musical hybrid of Rock, Electro, Metal and Pop. The four musicians, from the with about 30.000 inhabitants truly tiny Principality of Liechtenstein, know each other since their young years and played together in different formations, casts and styles since the middle of the 90’s. That precisely this constellation from all tried variants has now come together, is not a coincidence. The diverse characters und musical preferences of each band member, caused the required friction whose chemical reaction now in ETTA ZERO and in their album “The Last Of All Sunsets“, which will be released on May 30 through Dr. Music Records, connects to a homogeneous mix.

Originally the group was formed in 2000 under the name Downfall as a Synth Pop Metal band. They started with turning covered 80’s Synth Pop songs into Rock numbers, but over the years the group wrote their own compositions. Downfall published two EPs (one four track cover EP & one four track EP with their own songs), won two band contests (i.a. at Radio Liechtenstein with their own composition “Sorrow“ in the category ‘Best Song International’) and played countless concerts in Switzerland, Liechtenstein and Austria until they finally dared a new start under the name ETTA ZERO in October 2010. Briefly after their renaming, ETTA ZERO began with the recordings of their debut album under the direction of Tommy Vetterli (Eluveitie, Coroner, 69 Chambers…). After finishing the drum recordings, a serious illness of one of the band members put the activities of the group off for over one year. A stroke of fate, which only welded the four closer together. The recordings for “The Last Of All Sunsets“ were finally finished at the end of 2012. The lyrics of the Dark Rock album deal with the contradictions of light and shadow, beauty and death, the bittersweet note of the end, which is always the origin of a prelude, too. On various levels it reflects both the end and the recommencement as well as the perfect moment in between. The soft sounds of the intro “Something Big“ invite to a metaphorical journey, but already the second title “The Last Of All Sunsets“ awakes the listener from his daydream with a voice that gets under your skin and rough musical background.

In the songs „Sorrow“ and “All That I See“ ETTA ZERO assimilate emotions like pain, mourning and despair about failed relationships and fight with self-doubts. “From The Ashes“ ties up to this content and with fierce guitar riffs it encourages to get up again after setbacks. A contrast to this is the song “Heartbeats“, a cover of the Swedish Synth Pop duo The Knife, which builds the musical bridge to ETTA ZEROs roots as a Synth Pop cover band. With the last and longest song of the album “Heaven Is Closer“ ETTA ZERO once again combine everything that constitutes them: harsh guitar sounds, a fascinating voice but also soft, electronic sounds.

The limited first edition will be released on May 30, 2014 through Dr. Music Records and includes a Remix of the title song by Sybreed mastermind Drop as a bonus track.