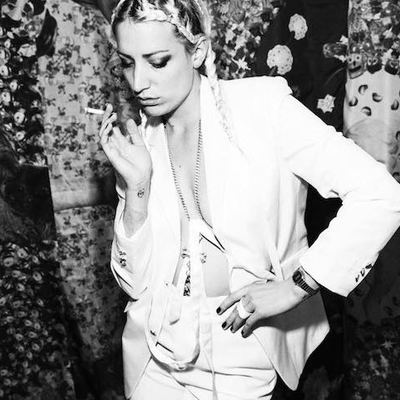 Rock, Zürich – How do you perform a concert with an arrow in your head? You break it off and cover the wound with powder and glue. Then you head up there and do... Read Biography

How do you perform a concert with an arrow in your head? You break it off and cover the wound with powder and glue. Then you head up there and do your best to keep face in the spotlight, because the show must go on.

This nightmare is the story of Arrowhead, a character created by Evelinn Trouble and the protagonist of her latest album. But „Arrowhead“ is just one of Evelinn Trouble’s many creations; She played the vengeful Salomé in the opera of the same name, she mimed Dorothy of the classic „Wizard of Oz“ in one of her many colorful music videos („Shed It“). Evelinn Trouble as an artist is a shapeshifter. With four albums released to wide acclaim in her country of origin switzerland, her fans know by now that the only thing certain when it comes to Trouble is that nothing is certain, because she seems to be addicted to transformation and surprise. While her debut was a lo-fi pop album, the next one took listeners aback with her abrasive take on industrial doom rock. Then followed an all analog live recording that mixed motown aesthetics with Trouble’s eerie songwriting, after that an EP with covers of old evergreens. It surely took a while for people to understand what she was doing.

10 years of Trouble have created a universe, whose dark undercurrents are tangible and shake listeners to their core. Her music and lyrics breath the story of a venturer, limits tested and risks taken, the search for a life worth living that doesn’t end.