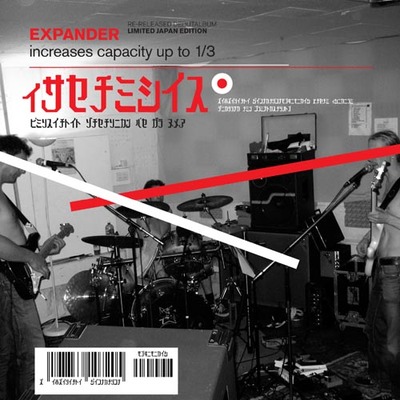 For music lovers who hate surprises, this could be a rude awakening: EXPANDER are back and they’re releasing their new album with the Polish cult label *Pro Stata Records*.

Like they say - "The Right Song in the Right Place”. It sounds like that’s exactly what the three members of EXPANDER said to themselves when they recorded their record at the CALIBER CLUB. As drummer and producer Adi Flück dryly comments when asked: "The 9 tracks we’ve brought out have huge potential". Guitarist Lee Schornoz has even gone a step further and is already writing his autobiography. Guest appearances by Delaney Davidson (The Dead Brothers) and Robert "Pantichrist" Butler on Hawaiian guitars and Dominik Alig on Afro percussion also prove that EXPANDER don’t miss a trick. That the album is being released on the Polish cult label *Pro Stata Records* (Bobo Killer; Trans-el-Sahib, Medley Crew amongst others), once again demonstrates what a good nose this little Warsaw record company has.

EXPANDER’s current line-up has been in place since 2002. Old fans will remember the formation when it went by the name of TRISOMIE 21 which had to be changed following a court injunction. The first EP came out soon after with the songs "Oh Ladie", "P.A.R.T.Y. " and "Godzwilla". Concerts were a natural result. But their cocktail of music split their fans into two camps at an early stage. An extravagant mix of styles between stunning boost rock and Mediterranean ballads have made people scratch their heads time and again. It’s a reaction that was also echoed in the music press: "(…) In addition, you sometimes meet people who only whisper the band’s name behind their hands. (…)" Der Rocker 04/04.

EXPANDER, sometimes affectionately know as "The Keepers and the Beast" play in the classic rock line-up of guitar, bass and drums. FELKA- & ZENO TORNADO bass player Mago Flück screams his head off once in a while - a sign of intensity and restlessness - two characteristics that prove that life is returning to the Berne rock scene which we thought was already dead. Anshelle studio guitarist Lee Schornoz and newcomer drummer Adi Flück also turn up the power while displaying solid musical skills. Keep your ears open - the band will be playing live again soon!

Registered since over 13 years
Last login on 19 November 2014