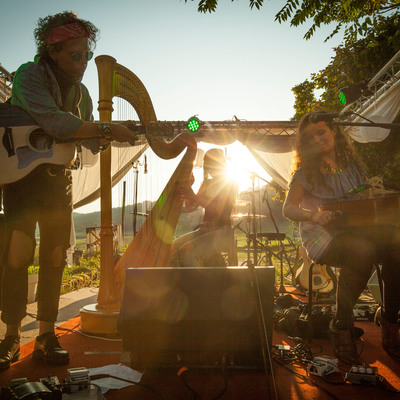 Classical harp turns into a pop sound experience and meets folky guitar, rocky cello, groovy drums, and polyphonic vocals. That’s all Eyebrows of Death need to create a unique mix of pop, folk, and rock with a touch of country.

"Eyebrows of Death" - passionate musicians from the Zurich area, who enchant their listeners with the musical style "Folk-Pop". They sing of unrequited love, key moments in life and the pursuit of happiness. All this they combine into a cocktail of joy, longing and passion, paired with catchy melodies, powerful riffs and danceable rhythms.

After the band was founded in 2016 they successfully released their first EP in May 2017, concerts in summer and autumn followed. The EP "Moonlight" was released in 2018 in the club Photobastei Zurich and became album of the week on Radio Inside. The following concert tour in summer and autumn 2018 was a complete success. The tour included concerts like Songbird Festival, Mutterschiff Openair, La Zone Piétonne, Krach am Bach etc.

Now the third EP of the band is in the pipeline, which is produced by Henrik Amschler (Loco Escrito, Swiss Music Award 2019). With their songs, Eyebrows of Death invite both their old and new fans into innovative, increasingly electronic sound worlds.