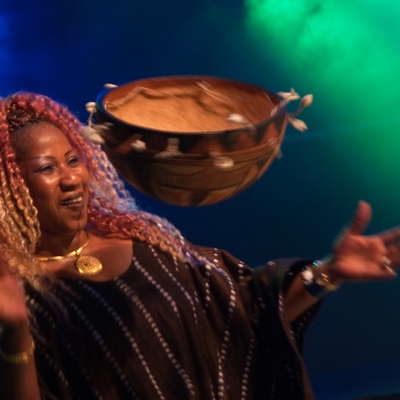 World, Vaud – 1978-2008: happy birthday FARAFINA! A flute entwines its melancoly call with the voice of the wind in the reeds as a young Peul shepherd dreams of... Read Biography

A flute entwines its melancoly call with the voice of the wind in the reeds as a young Peul shepherd dreams of his homeland, the dry and suncracked Sahel. He has left his sweetheart there, back in the North, and his now heading west, walking across the savannah. His destination is the royal city of the Dioulas, Bobo-Dioulasso where they told him that, in the old quarter of Bolomakoté, he would find a distinguished master of the balafon and leader of a famous ensemble known as far away as lands where snow falls…

This could be the opening scene of a film that tells the story of Farafina. The setting is sparse and barren ; the characters are honest and down-to-hearth with a communal spirit for their music and dance of such intensity that it drives the group forwards, in a whirlwind of joyous trance, to discover and communicate with other peoples of the world.

Farafina is essentially a spiritual concept, an « idea » of the music of Burkina-Faso, formerly Upper Volta, which is twice as big as England, but with a population of scarcely 7 million. In Bobo-Dioulasso, the art of the griots still thrives today as during the time of the ancient Manding empire. As strong spirit of competition, stimulated by the « National Week of Culture », has made the city a tremendous crucible of musical and dancing talent.

Farafina is also a « school », a place where experienced musicians, the « elders », pass on their knowledge to passionately keen young players. The young ones begin by carrying the instruments for the master musicians when they go to lead the festivities at marriages. To begin with, they sing and beat out the rhythm on stones or make-shift instruments. And if they seem to have talent they are given a bara or a djembé on which to pratice. In Bobo, there are at least three groups that originate from the « Farafina school » which numbers 25 musicians. The younger groups liven up marriages and initiations while the international group, made up of the best players, comes together mainly before the tours.

Farafina was founded in 1978 by Mahama Konaté, virtuoso balafon player and former member of the National Ballet of Upper Volta. He remains the spiritual father of the group which performs many of his compositions. In 1982, when Farafina went on stage for the first time in Europe, its repertoire was very traditional. Progressively , Farafina’s style has developed towards new forms of expression. Collaborations with Jon Hassel for the album Flash of the Spirit, with the Rolling Stones on Steel Wheels, contributions on Ryuichi Sakamoto’s Beauty, Faso Denou, album produced by RealWorld in Peter Gabriel’s studios, under the crook of producers as qualified as amazed at so much of force and beauty, Billy Cobham and Daniel Lanois, were all to highlight this new direction, without compromising the integrity of Farafina’s collective inspiration.

Farafina’s music has a polyrhythmic structure that is both complex and yet immediatly clear, but above all this music is an irrestible driving force to dance. The rhythmic framework is built around the tama (a little drum held high under the arm), the two balafons (wooden xylophones whose slats are amplified by gourds), the bara ( a bulbous calabash with goat skin) and the doumdou’ba (a long cylindrical bass drum). From this foundation the djembé (an hourglass-shaped solo drum with goat skin) is left free to soar. Peul’s flute and kora bring harmony into the equation, a breath of fresh air to encourages the voices.

Reinvented by the meetings with modernity, the Manding influences, the melodies of the people of Niger and Mali, the songs and the drums of Ghana and Benin, the legends of the city of Kong are also melted in the gold of Farafina.

Registered since over 14 years
Last login on 15 December 2010