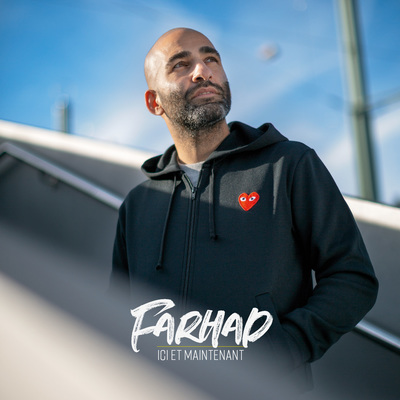 Farhad is a Swiss artist, of Iranian origin, 34 years old and living in Geneva. Singer, author and performer, he stands out thanks to his characteristic voice and his ability to sing in various musical styles.

Farhad began in the world of music with the violin, which he played for fifteen years from the age of 4. At the same time, he is passionate about singing, and practised intensely from the age of 11; at 15 he made his first appearance on record. Since then, he has been invited by different artists to work on a variety of projects, mainly choruses and backup, for example on the album "Love" by Def Bond, or the project "L’oeil ouvert" (The open eye) by Tepa, produced by Kool Shen of NTM.

Since 2008, Farhad has released several albums. His first project was "Farhad avant l'album" on which he worked with other well-known artists; in 2009, he appeared on a 16-track album "DJ Pimp presents Farhad", co-produced by Dj Pimp, containing previously unpublished work with renowned French artists such as Def Bond (soundtrack of the movie Taxi 1), or Redk, (produced by Soprano).

In 2010, the release of the album "A Chœur Ouvert" was a great success and was warmly received by the media and the public. The album again includes projects with famous artists, among whom some have become friends, including Soprano, Matt Houston and Sir Samuel (Saïan Supa Crew), who won the "Victoires de la Musique" in France.

In 2012, Farhad worked for Adidas in a performance that will be included in an advertisement made to highlight the brand in French-speaking Switzerland. Then the following year, he released a project called "Genèse" which has been downloaded more than 15,000 times on the internet, a great reward for all the effort and work put into the project by him and his team.

During the next four years, Farhad worked in partnership with his friend Ruff'D (David Saint) on new tracks in different musical genres, aiming at convincing and well-adapted titles.

On April 12, 2019, Farhad will release his new album "Ici et Maintenant", a universe mixing songs with lyrics, with an urban touch, which he has integrated into pop / variety songs, thus creating a genuine musical identity. He collaborates with great artists, including his friends "Akhenaton & Shurik'n" of the famous group "IAM" and "Faf Larage" author of the soundtrack of the series "Prison Break". The result: an album with 13 haunting titles.

He is currently recording a new clip with the title "Porte mon nom" that will be released on the same date.

He continues to collaborate with other artists on their projects and compilations in French-speaking countries.