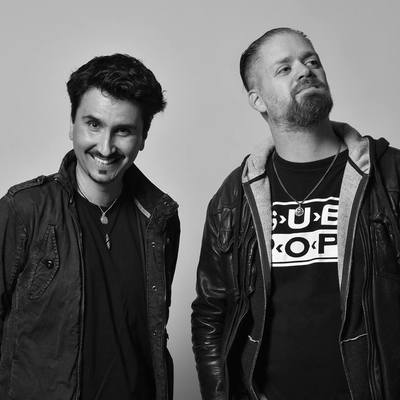 Acoustic Rock, Zürich – Music that wants to be nothing more, but can be everything In times of fake news and perfect digital pig world the need for authenticity is... Read Biography

Music that wants to be nothing more, but can be everything

In times of fake news and perfect digital pig world the need for authenticity is growing. And for real music, which does not need a big production, elaborate postproduction and loud promo. Which is all the richer in its essence.

"If you're looking for perfection, you've come to the wrong place. If you want to experience real feelings, you've come to the right place," says Pat Wydler, guitarist with the duo Five Rusty Horizons. For him and vocalist Goran Bajic, it doesn't matter if just one person disappears in the depths of their grunge-colored sounds or thousands get touched by their love rock.

Glamorous illusory worlds don't interest Pat and Goran: The sound of Five Rusty Horizons is pure, emotional, fragile and above all honest.

After their journey together with the successful Swiss grunge band Soul Strip, which took the Zurich-based band as far as California and as supporting act for such greats as Alter Bridge and Stone Sour, Pat and Goran played separately in different formations for years.

While Pat tirelessly followed his passion, there was also a long period of musical silence for Goran, during which he put aside his striving for the measure of success and rediscovered the joy of music without the pressure to succeed.

Both musicians have not felt as fulfilled as they did with Five Rusty Horizons for a long time. For the magic that can arise between two old friends with guitar and vocals is at the same time wonderfully emotional and also frighteningly unpredictable.

And as real as music can be.

Registered since over 2 years
Last login on 13 January 2022