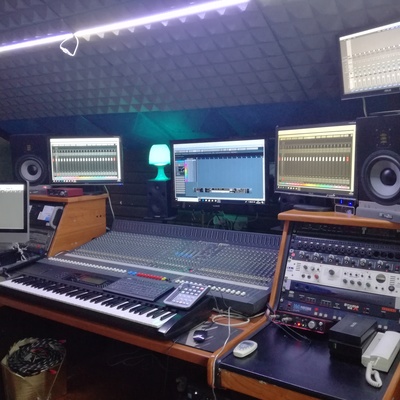 Francesco Oliviero, class of ' 67, young began to study music. His parents, owners of a historical activity of musical instruments in Caserta, I invite you to cultivate a passion that, upon reaching maturity, will become his "Dope". Aladdin master student Darwish, one of the most famous directors of conservatives and Professor, attending the study "harmony and composition," Francis, to the growing desire to "discover" and "steal" the secrets of music combines this strong faith Catholic who led him, at the time of their departure, to devote two homages to Saint Pio and Pope John Paul II. A faith that greatly reduces the influence of the same master Di Martino, tied up right in the Friar from Pietrelcina, whose "works" are, nowadays, the heritage of all. Various artists-national and international-with whom Francis was able to confront, sing and grow, specializing later in what will be his true vocation: arranger and composer. Vocation that gradually takes body phonographic recording studios "The Mediterranean", which for him represent a "gym", and that will take him later to found the "Meridiosound", first in a long series of studies professional registration through which further perfected his technique, which combines Francis brilliantly multimedia technology with the seven musical notes. The "virtual orchestra", the orchestra (instruments and sounds) played virtually, through sophisticated computers of Anit Studio one Recording, is the centerpiece of the artistic-musical specialization of Francis, who launched him into a dimension that goes beyond national boundaries. Several artistic collaborations that Francis collects during its path of growth and success. among the most significant, those with Ivan Cattaneo and Bobby Solo in ' 93 sign the soundtrack of the movie "Yes, but we want a male", directed by Giuliano Biagetti for Mediaset. In the same year, Francis collaborated on music for commercials of "disposable" and "bib Nescafe Nestle group." in ' 94, he started working with the author Pasquale Zakaria; among the most appreciated "when we were children," winner of Recanati Festival, and "Dint ' or viento", brought opera company "Olio" from 96 to ' 98, From Mina ' Francis shares the wonderful adventure of the Nccp, Nuova Compagnia di Canto Popolare, historical Neapolitan group founded by maestro De Simone; with that group will work both as a musician, for the tour "Tzigari", both as an accordionist in the cd "fish or sea", presented in SanRemo in ' 98, with special guest Angelo Branduardi. Between ' 98 and the year of Jubilee Francis performs in several prestigious theatres (such as the Milan Squad, the Sistina in Rome) and participates in various festivals; one among them, the Ravenna Festival directed by master Richard Muti.Il 2001 marks an important turning point in the formation and artistic development of Francis, who, on the occasion of "Leuciana Festival", is called by Jewish singer Noa to accompany her in her amazing performance, highly acclaimed by critics. And it is precisely this circumstance which Francis gives a taste of his constant search of multimedia applied to music. In the same year, she performed with the guitarist Gil Dor (I remember how Pat Metheny's favorite pupil) and takes part in the International Festival of Summonte as guest in the international group led by percussionist Domum Romao. The same period, in the framework of the theater Augusteo Naples international artist piano accompanies with Amal Markus and his Band in 2002 is touring with Enzo Avitabile, historical saxophonist and composer, considered by critics as "one of the geniuses of Soul Music". It is dated 2004 the cd release entitled "a journey into the world of soundtracks"; CD which, officially, is presented in July on the occasion of the event "Four nights or more full moon" in Benevento, in collaboration with the Association of Isis Nova, whose Chairman Sandra Lonardo Mastella. In 2005 as Director signature artistic, the television format "Star for a night"; format proposed by Lunaset television network in collaboration with the Airc (Italian Association for cancer research). Also in 2005 he participates in the telecast, broadcast on RaiDue, "over you", invited by Paola Perego. In 2006 presents the latest work, entitled "a life of music ... music for life "; project that contains the tribute to the late Pope John Paul II. In 2007 Italiamia group, this television network in 11 provinces of Italy, entrusted him with the corner tv formats successful musical entitled "about her", whose management is entrusted to a professional journalist Emilio Di Cioccio, today Director of Lunaset.it, winner of the premio giornalistico "town of Santa Maria Capua Vetere. Between 2009 and 2010 participates, juror, to tv formats "Miss Italy Campania" in which the partnership between the television network Lunaset and the historical brand of Miss Italia.Ad today the abbreviation of tg and signature of Francis Samarasinghe advertising Lunaset Group (TvLuna Naples, Caserta, Avellino, TvLuna TeleBenevento, Sky852 Lunasat, Lunasat Telenostra. may 2010: Francis, with his wife Lara, featured on RaiUno in "Festa Italiana", afternoon conducted by container known compatriot Catherine Bailiff. June 2010: Francis; with his wife Lara, starring on the big screen as an actor reads a comedy, in the role of (tourist) in the movie "the trick in the sheet" with Maria Grazia Cucinotta and Primo Reggiani, directed by Alfonzo Arau, Vittorio Storaro. of photography and an international cast December 2010: Francis, signing with Alessia ... Macgregor the Musical "Dream" written and directed by Denise Macgregor-original music by Francesco Oliviero-choreographed by André De La Roche. December 2012 April 2013: Francis writes with the author Stephen Dadd "In the Sky for a wihile" for the winner of the television format "THE VOICE OF ITALY-Elhaida Dani. Dani Elhaida cd distributed by UNIVERSAL MUSIC.

Registered since about 11 years
Last login on 9 February 2021