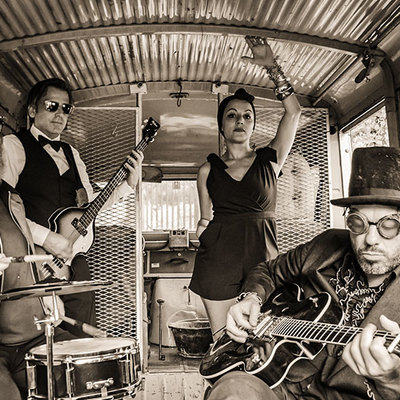 In winter 2018 Frankie Safari released a 7“ split single with the Baseball Bat Boogie Bastards, which was recorded by swinger and songfighter Zeno Tornado at his country shack.

In fall 2018 Frankie Safari headed south to record their debut album "From The Wild Frontier". It was recorded and analogously burned on tape by Matt Bordin, producer and sound wizard of the Inside Out Studios in northern Italy. The cover was illustrated by Bern’s fifinest Dirk Bonsma and as if that weren’t enough shenanigans already Chris Calame of Blackyard drew a Frankie Safari pulp comic for the record release.

The LP was released in December 2019. You can get it in stores around and it's available as download, stream etc. If you want it digital, you go best to bandcamp.com !

Like that wasn’t lucky enough, the one and only Mrs. Jungle Matsumi joined the three stooges in spring 2019 and completed Frankie Safari with her evil eyed charm on the organ.

All together Frankie’s cast gather half a century of hard boiling rock’n’roll experiences with bands like The Dead, The Monsigniores, The Babies, Gebrüder Ritalin and many more. Their live show is furious, loud and sweaty, preformed with all of their dark gone hearts and their music is a exotic, raw and hypnotic rollercoaster ride to the bottom of the soul!

It’s a safari to the rocky fields of the stoner’s desert, the sweet and delinquent spots of rock’n’roll, the obscure and wild homelands of swampy rhythm and blues, the wide prairie of the dead men’s country and to the windy oceans of seedy blues – with a little break at the Surf-Inn.