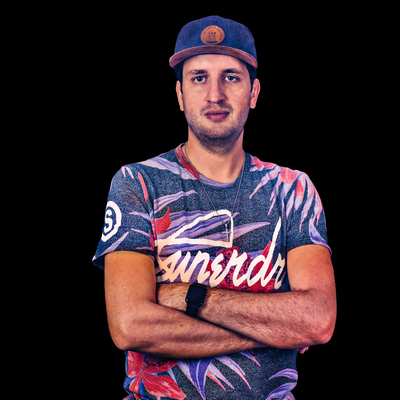 Techno, Bern – In the year 2010 FreeG released his first album and in 2012, with the album YELLOW by Flava & Stevenson, FreeG appeared for the first time as... Read Biography

In the year 2010 FreeG released his first album and in 2012, with the album YELLOW by Flava & Stevenson, FreeG appeared for the first time as producer for other artists. This album immediately reached the 22nd position in the Swiss album charts and the 29th position in the single charts, with the first single release “Rio de Janeiro.”. In the same year he released together with Saymo’K the album “Re:Fresh” and together with Flava & Stevenson the single “Good Time”. This top 10 hit achieved platinum status in Switzerland, was licensed by Kontor Records and the video clip has over 1’800’000 views on YouTube.
Since then he has produced three more chart albums with Flava & Stevenson: „White“ (2013), „Quantum of Dance“ (2014) and „Dynamic“ (2016), and three more charts singles (including the top 10 hit „Love a Paris“). The album „White“ was also nominated for the Swiss Music Awards.
With “Wake up” FreeG released his third album in 2014 and in the same year he reached the 4th position in the Swiss single charts with the song “Kingdom”. Since then, the Swiss DJ and producer has also been increasingly on road in Germany, inspiring the crowds of events with up to 20’000 visitors.
In 2017 FreeG produced the chart hit “Kids of the Sun” by HUKY and released the single “With You” together with the Englishman Twelve24.
In 2018 FreeG started with the club banger THE GREAT ESCAPE and landed another chart hit (peak 25), which remained in the Swiss single charts for seven weeks. For this single FreeG brought on board the Dutch singer Sibbyl, who has already worked with acts such as DJ Antoine, Dizkodude and Arston.
For his single "Feet in the Sand" he has teamed up with the Lucerne X-Stylez & Two-M, which are best known from their single “STAY” (over 1 million Spotify plays, Disco:way, Sony Music Germany, etc.).

This year Flava & Stevenson and FreeG were in the Swiss Single Charts for a total of 13 weeks with Summer Love, Feet in the Sand and The Great Escape. Summer Love even stayed in the top 10 for two weeks. Now the two successful acts from Berne, with the song ANGEL in the FreeG Edit, release their last song for 2018 together.

Registered since over 14 years
Last login on 3 February 2020