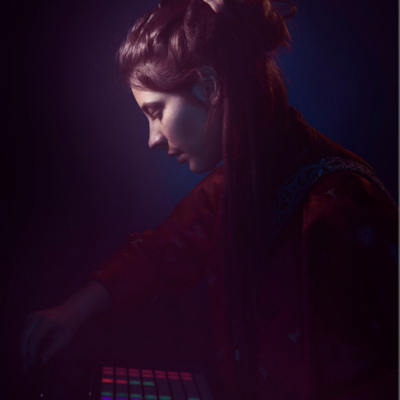 Downtempo, Valais – Freequeensea is a downtempo electronica artist that performs her productions live along with her South American charango guitar and her dreamy... Read Biography

Freequeensea is a downtempo electronica artist that performs her productions live along with her South American charango guitar and her dreamy voice. By merging psychedelic guitar riffs and tribal downtempo beats on Ableton push she takes you on a dreamy and melodic musical journey. On September 13th she released her Debut track -Out of Space and Time. She's also a resident performer at the Love Shack in London where she performs monthly for the Dance through Dimension events, that the Love shack named their most successful night of their Program.
Last summer she was on the line-up for festivals such as into the wild, Boardmasters and the Love Camp out in London. She played in London, Berlin and Manchester. This Summer she plans on touring throughout Europe and playing at various festivals.
She also collaborated on a song of Kirk Spencers new Album: deadkit57, part 2.
All her tracks are fully produced by herself. The next release -Into the Dimensions with you- is planned to be released on the 29th of Mai 2020.

Registered since over 1 year
Last login on 11 January 2020