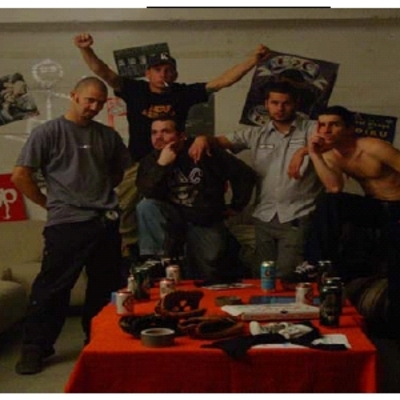 Fullstop holds its actual formation since 1995 : Jonas (voice), David (drums), Robin (guitar), Matthiew (bass) and at last Julien (guitar, but not the same one as Robin!). At the arrival of Julien, Fullstop has been creating its own music with a general enthousiasm and began playing their sets live.

In 1996, Fullstop plays for the first time at the "Cave de l'îlot 13", in Geneva, for the first part of Knut an Nostromo. Then Fullstop will keep going forward by playing new live shows. In 1997 they get their first studio experience, at Thoune, in whitch they record 10 songs in an ambivalent style. These titles combine two styles : skatepunk an hardcore. This little demo will enable the group to have a little name in the music circle and get more concerts.

While continuing to promote their music with lives, Fullstop turns to a more brutal and mature style which suit them better. In the current of 1999, the group, that has turned totaly hardcore, records 11 songs in a studio of Geneva (" the smelly room ") with thierry Van Osselt. This first album, called " New Yak style ", is under the label of Hannibal records. This CD will have some rather encouraging and positive impressions in magazines, revues and by the public. After about 30 concerts in switzerland, Fullstop begins the composition of a new more consequent and thought set.

In 2001, Fullstop is back in studio with the excellent and henceforth friend Thierry Van Osselt to record 14 tracks of pure hardcore-metal. This album titled "2001 FULLSTOP ODYSSEY" released on Hannibal Records and also coproduced with the new Condor records label marks a turning point in the career of the group.

Fullstop is a band full of ambition and passion.
This last album is for us a materialization resulting from several years of work and friendship. This CD provides a not so common style on the Swiss hardcore-metal stage. Indeed, with a solid concrete sound, Fullstop mix their influences of old school hardcore and some good metal riffs. The result is 13 titles of fast, precise tempos with striking and effective arrangements. The drum section is violent, fast and square, the guitares and bass sound warm and heavy, as for the voice, it is low and aggressive. The result is a violent and effective hardcore. According to what we've heard, the band is close to the styles of American metal as much for the compositions than the sound.

On stage, Fullstop releases a great amount of energy. Every member of the group participate to the live shows by their own way but each one with their guts!