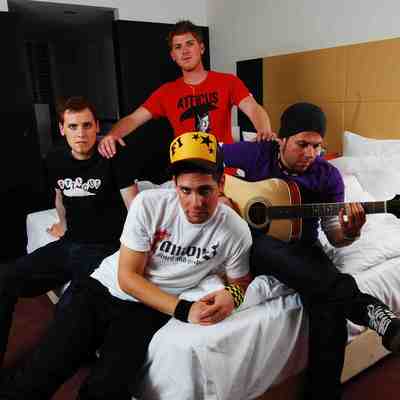 FUZZY INDEX (FI) is a pop-punk band from Zurich,
originally founded as a school-band back in 2001. In ‘03
two members left and with a new drummer the FI-sound
got more energetic. A mixture between rock, punk and
pop is played with a lot of fun and energy, which made
the base for their success!

The first EP „just a show“ was recorded, songs were
released on national and international samplers and with
loads of live-shows back home and abroad they were
making noise wherever they could. The year ‘06 started
with their own „taste punkrock-tour”, playing clubs in
Switzerland very successfully. Another fact why FI
definitely is one of the most active Swiss newcomer
bands!

In the summer of ‘06 FI produced their new album „insecure“ together with strongreactionmusic,
recorded at the world famous PowerplayStudios, which finally was released in CH/D/A in march‘07.
Their songs “melodies” and “pick me up” are played on several radio-stations in Europe and after a 6-
months break where no shows were played FI now added a second guitar-player and is planning their next
Europe-tour to play live again!

For upcoming Shows, more Information or other Stuff check our Homepage:
www.fuzzyindex.ch

Registered since about 14 years
Last login on 7 August 2009