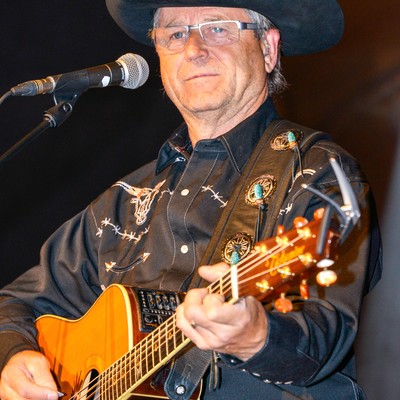 Folk/Country, Country, St. Gallen – Biography George Hug, born on 27th October 1952 in Weesen (Switzerland) gains presently, been one of the most famous and reputed... Read Biography

George Hug, born on 27th October 1952 in Weesen (Switzerland) gains presently, been one of the most famous and reputed Country-Music performers. Continuously the majority of his worldwide-successes are more than highly appreciated. Getting back to his discography, it is evident that all these successes came up through strong and intensive works during all these years. George Hug is the Interpret who sings all songs authentically. In fact he is living his songs. Numerous own compositions are giving the warranty of a memorable and great concert.

Live at the legendary « Grand Ole Opry », various US TV-shows, and several clubs, as for example the Stock Yard and Nashville Palace etc. are more than a reference of performances and knowledge.

To be considered as the European « High-Light » : The International Wembley Festival in London (UK) where George Hug was representing 3 times his country of origin. Acting In the middle of the most reputed oversea Country Stars, George Hug got repeatedly « Standing and Ovations » for his exceptional and amazing musical shows.

In addition to George’s international activities, he presented his show, 3 times at the occasion of the Hallen-Stadion International Festival in Zürich Switzerland. Been a prophet in the own country, doesn’t seems to be for importance to George Hug – as the Swiss-fans, in the same manner are appreciating and applauding frenetically the performances of George Hug.

While the Euro Music Masters in the Netherlands, George Hug was requested to represent Switzerland. Competition to the « Stern in Berkse-Bergen » was discernible by the high level of performances. The own composition « Freindship » allowed George Hug to get the 3rd rang and as well as the songwriter-price for his recital.

Further High-Lights were taking place at the Texas Tour which brought to George Hug, popularity and success in the US-News-papers.
With movies and rodeo-Stars witch call for strong Texas-Traditions, George Hug was very much welcome and described as « Europe Special’s Guest ».

At the occasion of the 10th anniversary George Hug performed a show at the « Fan Fair » in Nashville Tennessee-considered as the largest country festival at all. Even the short time given to the TV-Cannel, the fans wanted George Hug for additional songs. Comprehensible that George Hug was honored with a Medal which normally remains a particularity for the most important Stars in the USA only.

A very important dream became reality in 1996. The opportunity to set a Classical-Concert was given to George Hug. As The European Pioneer in that area, he performed successfully a live-concert with 50 musicians. Several TV and Radio channels were transmitting that unique and exceptional event.

Presently, George Hug is one of the most popular and most appreciated Country-Star in Switzerland. Getting back in the years, we will discover endlessly successes and numerous compositions, which allowed George Hug to become an esteemed singer.

Registered since over 14 years
Last login on 3 February 2020