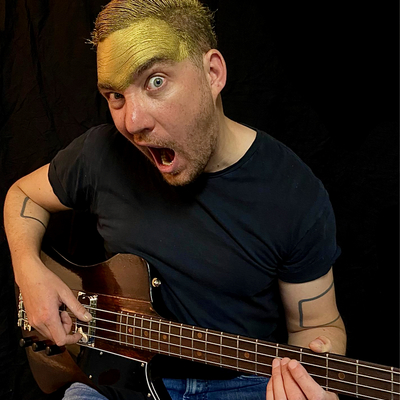 GOD Y
GOD Y is the solo project of Manuel Clausen, founding member of the Swiss independent record label Ikarus Records (2004) based in Zurich. Since 2011 he runs the label with Rohan Olagamage and some other guys. Manuel Clausen does promo, booking and takes care of the bands. He was drummer of three Ikarus Records bands (the pilot, Kid Ikarus and Davv). On social media he uses his alias Gody Schwendimann, that’s how the name GOD Y has been created ( pronounced «god why»).
«punilla two» is the second own written and recorded track of GOD Y. A year ago he released his first track «la falda one». Manuel Clausen lived his first five years in the region Punilla (Argentina). This time had a great influence on him, because his parents were subsiste
Recording
The beginning guitar arpeggio part is nearly 20 years old. During his college time he wasn’t allowed to study the drums so he had to start with classical guitar. Luckily GOD Y can now use this part for his second song. All instruments were played and recorded by GOD Y (guitar, bass, drums and synth) at «CIELO MALO» studio/Zurich. The powerful track can be classified as Postrock/Instrumental Rock. The guitar on «punilla two» was made by Rohan Olagamage, a member of Ikarus Records. Since some time Rohan builds his own guitars and basses made out of reused wood. He sells them as ROHAN guitars. GOD Y recently received also a ROHAN bass, which will be heard on the next GOD Y track.
Benjamin Schmid has done again the powerful mix. He is a member of another Ikarus Records band called DUARA. All members of DUARA are also founding members of Ikarus Records.
Dan Suter of Echochamber in Zurich has done the mastering.
Video
The video of «punilla two» has been made by Yvonne Schmid and GOD Y. All scenes were filmed with only two smart phones. Huge thanks to Yvonne for her great work.
Links
First video «la falda one»: https://youtu.be/5QHvtO2_Qtk Instagram: https://www.instagram.com/godyschwendimann/ Label homepage: https://www.ikarusrecords.ch/en/artists/god-y/

Registered since over 2 years
Last login on 1 July 2021