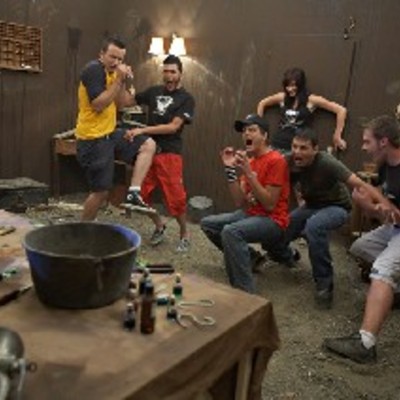 Rock, Vaud – ‘Their music style comes from California, but Grand Bastard Deluxe are from Lausanne, Switzerland. Their motivation is to bring you well being with... Read Biography

‘Their music style comes from California, but Grand Bastard Deluxe are from Lausanne, Switzerland. Their motivation is to bring you well being with their catchy and sweety pop punk.’

2003
In October, the first songs are written by the band. Two months later, they record their first demo at AUM Recording in one day. Two crappy shows in front of drunken people end the first year of the band.

2004
This year starts well with their first official show. GBD play at the ex-dolce vita in Lausanne and the gig is a success. A few months later, the four punkrockers have played around 15 shows and shared the stage with famous bands like Ska-P (es), The Vandals (usa), La Ruda Salska (fr), Never Heard Of It (usa), Superbus (fr), Tafta (ch), Mother Kingdom (ch),… The summer and the sun are back: it’s time for the band to record the new songs they wrote! This EP titled ‘Still At School’ contains five explosive, melodic and fast tracks. Grand Bastard Deluxe will then increase the number of shows. At the end of the year, the band wants more power in his music. Greg, as the second guitarist, reaches the formation.

2005
Full of promises! It’s probably the best way to describe this year… The guys play many shows with some famous European and American formations, record the preproduction for their first full-length album and last but not least, win the third price (CHF 10’000) of the MyCoke Music Competition (Coca-Cola & Yamaha) over 420 other bands! Then Keetch Clothing, a Swiss clothing company, proposes the band to integrate into their ‘Music team’ to represent their products. GBD are then part of this team with bands like Watcha, Clawfinger, Lofofora or Meshuggah…

2006
This year is the release of the first album ‘Love, Stars & Broken Hearts’ (distr. by Irascible). The band is invited to play in several venues but devotes most of his time to record the 10 songs that were chosen to appear on the CD (produced with the help of many sponsors). A video clip for the song ‘Not The Way’ (directed by Victor Jaquier) is also filmed and gives the band the chance to have regular TV appearances. Many shows are planned (Switzerland and foreign countries) for the next months and next year, so be prepared!