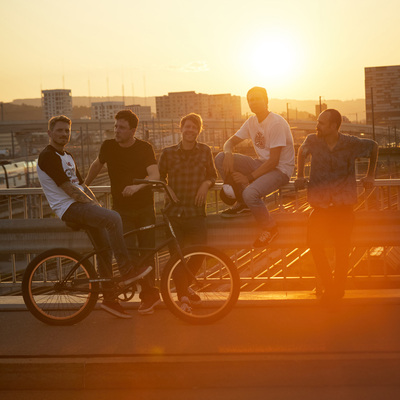 Alternative, Indie, Punk, Zürich – "Life is not a fairground, it carves its best stories into our hearts." With "On And On" Gran Noir follow on from their successful last album... Read Biography

"Life is not a fairground, it carves its best stories into our hearts." With "On And On" Gran Noir follow on from their successful last album "Electronic Eyes" (Spotify Rock Rotation take over with almost 1 million streams, airplay in UK, USA, Benelux, Germany, Austria and Switzerland, Germany tour...) and they show a clear musical and personal development:

2019 Gran Noir go through a rather turbulent year. Forged plans are suddenly thwarted by fate. Shit happens- life happens... And then they asked themselves: "What is this really about? The reflection on the core of things: music. Making music. Without stress. And that's what they did. We are curious to see what will happen in the near future...

As they were returning to music, family and friends, it made sense to work in the Alterna Recording Studios in Basel with an old friend and companion, Philippe Laffer (Supernova, Zhivago), a proven expert on buttons and controls (Crimer, Kaufmann, One.Sentence.Superviser, Panda Lux) to venture into new territory. Even if he shouted "Gitarrenbretter, yes please!" to them as soon as they arrived at the studio, this song is characterized by its detailed, meticulous and careful elaboration and several months of collaboration. Despite the serious theme of this song that is so important and personal to the band, more than a spark of hope shimmers in wonderfully arranged guitar, violin and vocal parts. It is said that the narrowest circle of the band, which was already allowed to hear the gem, was moved to tears.

"On And On" keeps its promise: Gran Noir didn't let themselves be pulled down, didn't give up, persevered, made the best of the situation, set the focus anew and emerge stronger from this moving year with this glowing song.

The video of the song was produced with love for detail by the band with the Swiss World Cup downhiller Annina Bruehwiler and Mario Hickethier. The remote Black Forest hut from childhood is a place of remembrance of an old friendship that was torn from this world far too early, every crack in the wood panelling is permeated by long evenings and shared history. The unique pictures of the Julier Pass in Graubünden show that the deep connection with life is a constant outdoor adventure.

The band felt how quickly something valuable can disappear. They live in the present moment and they recommend this maxim to all of us with "On And On".

People: "If we weren't here, we wouldn't be able to experience all this!"

Registered since about 11 years
Last login on 27 August 2021