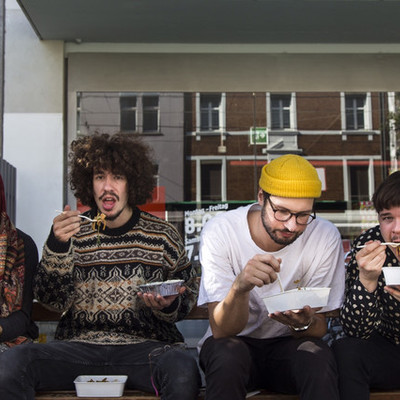 Pop, Basel-Stadt – After releasing their debut album “Gossip” and playing a whole bunch of shows in the preceding year, namely with bands like “DOPE LEMON”, “Sugar... Read Biography

After releasing their debut album “Gossip” and playing a whole bunch of shows in the
preceding year, namely with bands like “DOPE LEMON”, “Sugar Candy Mountain” and “Mild
Orange”, Hank have retreated to take a deep breath and pay attention to their everyday
duties. With several songs from their LP being played on major Radio Stations throughout
Switzerland, Hank could afford to spend some more time with relatives, play some
basketball and cuddle their cats. But still they have been productive:
Without much ado Hank wrote and recorded their four-track EP “These Days” in their own
studio in the course of a week.
I’ll be your friend. Their claim is also their main message, and if they cannot attend their
duties as friends in personal, their music certainly will. Hank touches you, where only few
possibly could; right in the feels. Be afraid no more, look around and reach out for your
beloved ones. Songs of love don’t have to sound like the cheesy romantic pop-songs. To be
honest: Nobody wants to hear anyone singing about the Hollywood-love everybody knows
doesn’t exists. We’ve heard it all before. It’s time for honest feelings, and Hank is there to
deliver them these days.

Registered since over 3 years
Last login on 14 September 2020