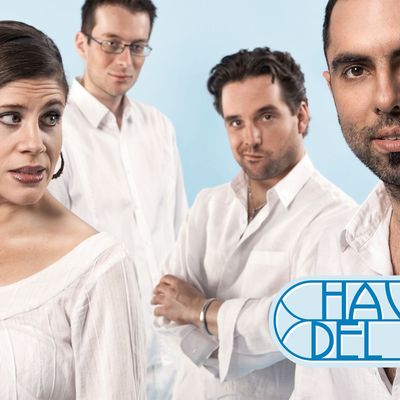 "Havana del Alma" are deeply rooted to the traditional son cubano - the timeless
folk songs of Cuba, which the musical documentary "Buena Vista Social Club"
made known worldwide. Performing with sweeping virtuosity, this experienced
quartet blends old Cuban heritage with Creole rhythms and Latin folk to deliver a
fiery mix of salsa, bossa nova and Latin jazz. Cleverly concerted arrangements
condense the performances of these four professional multi-instrumentalists to
the sweeping sound of a full-fledged Latin combo.
Abdiel Montes de Oca is a native Cuban. As a pianist and singer, he is the leader
of "Havana del Alma". Fifteen years ago, he turned his back on the political
regime of the Cuban capital – but, nevertheless, always kept Havana in his soul.
In duet with Brigitte Wullimann (vocals, percussion) and together with Marco
Rohrbach (bass) and Adrian Christian (drums and percussion), his very own
“Havana del Alma” is heard and enjoyed since eight years - far away from Cuba,
but with sparkling lust for living in every note.
In autumn 2011, the quartet releases its second album "Margarita", wittingly
venturing beyond the purely acoustic settings of their successful debut
"Momentos" (2008). Eight new own compositions ranging from classical son to
sizzling salsa pop fabulously blend with two traditional Cuban standards. The
result is a joyful and light-hearted listening experience which touches the heart
while loosening the hips.