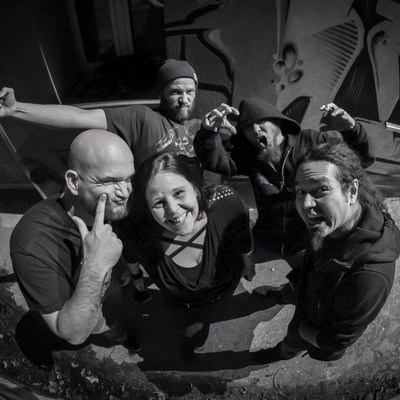 HELLVETICA stands for explosive shows, extreme
stage acting, fat live sound, strong interaction with
the audience, spiced with a decent portion of Thrash
Metal and garnished with a whiff of Hardcore and
Punk.
Hellvetica are playing since 2004 on several
stages through all of Switzerland and Europe.
Two Special highlights are the appearances at
Switzerland’s biggest Punk/ Hardcore and Metal
Festival, the Greenfield Festival 2019 and the
legendary Openair Gränichen 2019. Top Acts
such as Slipknot, Lamb of God, Die Toten
Hosen, At The Gates, Behemoth, Amon
Amarth, Sabaton, While She Sleeps, Sick of it
all, Skindred, Enter Shikari and many more are
playing these two festivals.
In 2008 they released their first Demo EP «A New
Hate Is Rising». This was followed up in 2011 with the
release of the LP «Your Last Breath» and 2014 with
the EP «Deadly Eyes».
HELLVETICA has managed to establish themselves
with their release in 2017 «Against The Odds» as a
seriously taken, uprising underground band all over
Europe. The Album even managed to hit the 10th
rank of the webzine old tendencies (53’000
Followers) in the category best Thrash-metal
albums of 2017.
In 2019 HELLVETICA turned 15 years old. In
order to celebrate this they have unleashed
and EP called “BFJ”. This release represents
“THRASH WITH ATTITUDE” better than any other
release before