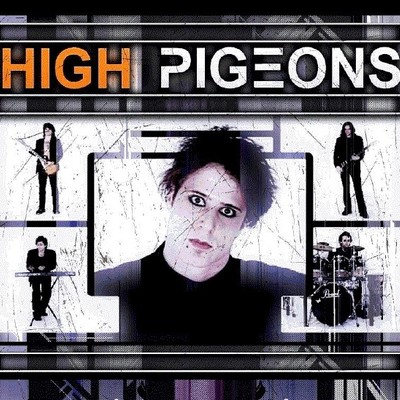 Rock, Ticino – About us... High Pigeons is an original no-cover Rock Band. The lyrics are sung in Italian and theyr rock is flavored by prizes of metal, few... Read Biography

The lyrics are sung in Italian and theyr rock is flavored by prizes of metal, few sprayed of funk and a dust of poetry, all served on spicy synth and Techno lines.

Shows of High Pigeons are always an electrifying event, its on live events that the band unfolds best the energy and potential of its great musicians.

The Band was first created by its founders Davide (voice & bass) and Marco (rhytm guitar) in fall 2006.
The two longterm friends were soon looking out for new talented and open minded musicians to create the project 'High Pigeons'.
So,a few month later, Gibi (drums), an excellent and versatile drummer, freshly forged at the National Drumschool of Milano Italy, joined the Band.
Followed by Toby (Keyboards) who just came back from a 7 years trip in the Philippines where he teached music at the European International School of Manila,
and finally last but by no means least, jan (lead guitar) who directly came from the biggest stages of Barcellona Spain, where he was playing professionally and studying flamenco guitar for eleven years.

High Pigeons were then ready to rock the world!
In less then a year they compose, arrange and rearrange theyr actual show which started to fill both, swiss and italian clubs right from the start of the season 2007.
Many concerts and events followed until, on June 2008, they won theyr first Band competition at 'Officina Musica' sponsored by Radio 3ii and Teleticino.
This victory led to several appearances on local radios and tv's

Still in June 2008 they performed on the prestigeous 'Euro08 UBS arena' as opening act for the quarter finals.

Actually (as of december 2008) they are working on theyr first promotional video clip 'datemi' wich will be officially launched on january 8 2009.

Speaking about january 8 2009, this will be the live event at TEMUS Lugano-Agno, wich will be filmed by a camera-crew of Music-Box (SKY TV, channel 717).
The film material will be used to make a 20 min reportage about 'High Pigeons', broadcasted later 2009 on 'backstagelive', SKY TV.

Registered since over 12 years
Last login on 2 February 2017