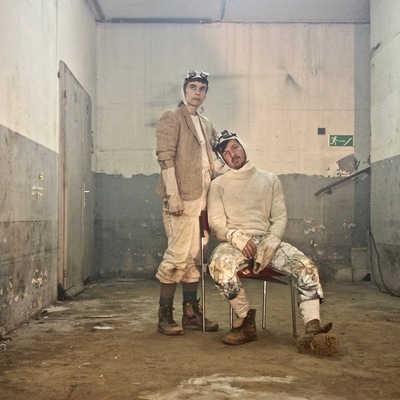 The CH/NL duo HOME MADE ISCREAM frankly sings about everyday problems in trashy pop songs; quirky and crispy, cheeky and direct. With hands and feet they play their homemade drumming machines, guitar and analogue Synthesizers; the whole band by two. A critical and loving homage to the mainstream music culture.

Donath Weyeneth and Maria Demandt crossed paths performing in the same dance theater piece in 2017. Funny enough.. they had to pretend to be a band during that performance. They immediately found each other artistically and got convinced of the idea to actually become band.

These sound-messies patchworked their rusty synth-pop music out of materials from their own life-long sound collections. With no fear of getting their hands dirty and the desire to sweat in front of their audience, Homemade Iscream was born in the tiniest studio on an industrial area between a welding workshop and the traintracks. Besides rocking their analogue Synthesizers and guitar they‘ve build their own drumming machines out of old metal in order to create exactly that rusty sound they want. For example the fingerdrum aka Spacehazet is irreplaceable since the very beginning. Words to the sound just floated out of direct reflections on daily life; harsh.... like metal, but also creamy and twisted... like Ice cream.