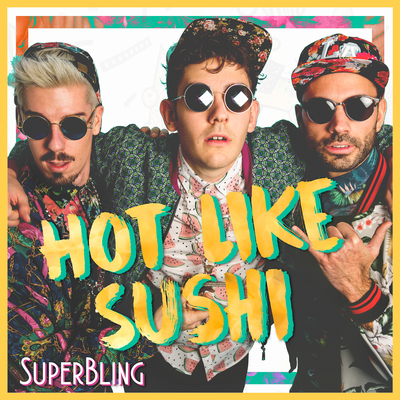 Pop, Solothurn – Along with the new single "Monogamy Rules" HOT LIKE SUSHI bring us their whole "SuperBling" EP. It shows that the guys seem to have found their... Read Biography

Elias, Luka and Sam are no greenhorns in the music scene. All three have already played hundreds of shows and had chart, airplay and streaming successes in various formations. After meeting each other while studying music, they decided at the beginning of 2016 to join forces and do their own thing.

Initially stylistically still quite clearly in the indie rock area, their music became more and more funky over time. Finally, with their single trilogy from 2017, the three boys from Basel, Olten and Winterthur were able to attract great media attention, plenty of radio airplay and over 250,000 spotify streams. Nevertheless, they felt that they couldn't shake their booties as tightly with their own music as with their role models Bruno Mars, Anderson Paak or Prince. There could only be one solution: Our sushis got on a plane to Los Angeles to immerse themselves in the local music scene and soak up the west coast swag. Together with platinum- awarded producer Benny Steele they worked on their music until 5 songs were created, that can only be described as "Swag Pop" - or indeed "SuperBling".

Hot Like Sushi are considered an explosive live act. When they are released upon the stage like a pack of peacocks gone wild, there's no going back. With danceable songs, singalong choruses, virtuoso instrumental craziness and unexpected show interludes the boys captivate the audience. They could prove this at numerous concerts and festivals in Switzerland (Gurtenfestival, 8x15, BScene, OneFM Star Night, etc.) as well as at the MUSEXPO in Los Angeles or at showcases in London, where even the Daily Mirror described them as "The best thing to come out of Switzerland since Chocolate...".

Where does the trio go next? No one knows, but one thing is for sure: HOT LIKE SUSHI will continue to do everything in their power to make the tushies of this world tremble.

Registered since about 5 years
Last login on 24 February 2020