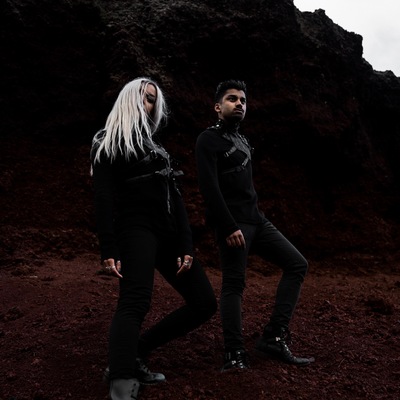 Pop, Vaud – Pop with a touch of Soul and Hip Hop, Imelda & Clyde is a unique and charismatic duo from Lausanne, Switzerland. With Imelda on the keys, Clyde... Read Biography

Pop with a touch of Soul and Hip Hop, Imelda & Clyde is a unique and charismatic duo from Lausanne, Switzerland.

With Imelda on the keys, Clyde on the drums and both of them joining on the vocals and composition, their music is a journey where bridges are build between different genres, mixing both their cultural ethnic influences with their contemporary inspirations.

It all started in 2016 when the two of them performed together for the first time in Lausanne, city where they both grew up. It didn't take long for them to get noticed. Less than a year later, they got the amazing opportunity to perform during the grand Montreux Jazz Festival as one of its main stage Auditorium Stravinski's headliners. A few months after this life-changing experience, the young duo self-produced their first and acoustic EP Not Alone, recorded at Metropolis Studios in London and released in April 2018.

Going out of their comfort zone has always been one of their ultimate goals. They released their new single and first music video "Everything Matters" on the 1st of June 2019. Now also performing with their two other band members, Dimitri Cochard (bass) and Arnaud Paolini (guitar), they are working on their new album and keep challenging themselves to go where no one suspects them to...

Registered since over 2 years
Last login on 20 November 2019