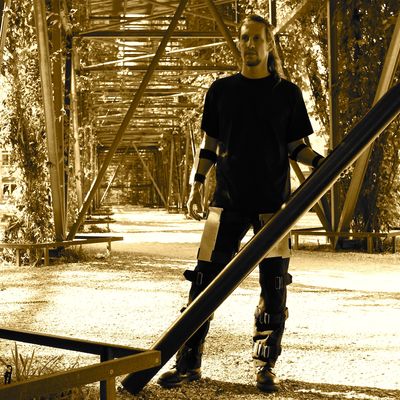 Electro, Zürich – Eisentanz does not just choose the usual presets and default settings using synthesizers and other electronic instruments, but instead dedicates... Read Biography

Eisentanz does not just choose the usual presets and default settings using synthesizers and other electronic instruments, but instead dedicates himself to the time-consuming and challenging path of sound research. He elicits a fascinating and archaic sound from the most diverse materials, whether it’s metal, wood, or stone, and thus finds his own interpretation of a timeless yet modern industrial sound. He builds his instruments himself as prototypes made from everyday scrap materials. The variety of noises he is able to produce from scrap iron, barrels, and metal springs is truly spectacular.

On the stage, he lets loose with hammers on the pipes, sets metal plates whirring, and is himself part of a flowing electric current. Eisentanz moves to the groove of a robot-accented sound system in which he himself steers his musical spaceship through expanded hearing loops. All live elements are then woven together and, using meticulously placed microphones, are incorporated into a total concept that whisks the listener away on a journey into the exciting, rhythmic heart of electronic music. This “sound of the “underground” will appeal equally to lovers of dark, melancholic, yet also percussive, sound collages, and fans of spherical, conceptual film music, and will delight enthusiasts of art exhibitions and genre-spanning performances anew.

The visual aspect of his performances is likewise an important component of his fundamental concept. Thus, abstract visuals, animated computer streams, and futuristic processes are displayed on the monitors. Eisentanz has performed his challenging music at important locations around the world between Berlin and India; he is a cosmopolitan who follows his own rules and does not fit in any musical pigeon hole. With somnambulistic openness, Eisentanz falls upon curious ears even after quarter of a century of sound technology.

Registered since almost 15 years
Last login on 4 May 2020