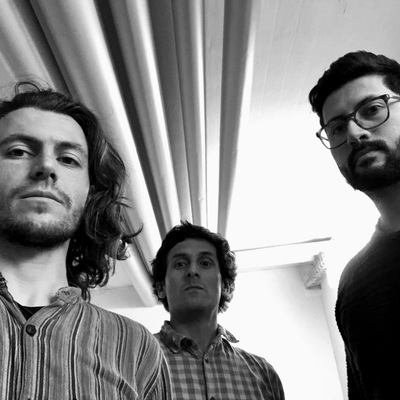 Experimental Post-Punk, Zürich – Jëkoff Sedofski performs honestly on stage. Each of their songs is inhabited by a different world, where different physics laws prevail. The... Read Biography

Jëkoff Sedofski performs honestly on stage. Each of their songs is inhabited by a different world, where different physics laws prevail.

The powerful and vibrating compositions include visual elements and restless optimistic music with influences from post-punk art movement, such as Joy Division and Sonic Youth.

What began as a musical experiment develops into the story of Jëkoff Sedofski, that story that allows itself to be told through the relentless sounds applied to each musical piece.

In late 2011 Gerardo (MX) and Mauricio (PE) started to play chunky rithms with drums and bass accompanied by video mapping projections to enhance the musical enjoyment. Later on, Simone (IT) added the perfect complement to the developing sound with his strident and very remarkable guitar playing.

The trio started to create songs and pitch a story… the myth of Jëkoff Sedofski.

By the summer of 2012 they recorded their first demo “Mi Mundo ” and started to have live shows in the city of Zürich and surroundings.

The second production named “El Paso” included songs like “Pipas de Marte” and “Rhetorical Question” and was released mid 2015 as they finished recording the EP at their own studio in Zürich.

Two years later in 2017, their first LP Album came out as “Basurolo”, 12 tracks round up this production that contains songs like “Perversa”, “Re” or “Passeggiata en Bicicleta” these titles are used as a perfect way to describe the adventurous life of the man himself “Jëkoff Sedofski” and the encounters with his eternal redheadead love or a one of the kind bike ride through the city.

At the beginning of 2020, just right before the pandemic, they performed as an opening act for the thrilling german band “Pictures” (former Union Youth) at the cult venue in Zürich “Dynamo Werk 21”.

It took more than 4 years after their last studio recording, to announce a new musical production of these multicultural, multisound, multifaceted trio.

2021 is the year of release of their newest album called “Dado” where the musical evolution of the band is delightfully exposed with 6 fresh tracks. This new production brings us a mix of powerful reefs, ironic lyrics and explosive rhythms.

The headquarters where the magic happens, is located in the city of Zurich and is called "La Cueva" - the cave. From this place they create, produce and record the ideas that emanate from these exhilarating heads, they will also produce the live streaming shows for the presentation of their new singles, it is worthwhile to stick your nose in to see what they are doing >> La Cueva

Jëkoff Sedofski’s music is all to hear in all major streaming platforms like spotify, bandcamp and apple music or at their youtube channel, where you can find the whole videography. But something that is worth not to miss, is the live shows as they perform explosively while the video-mapping projection helps to enhance the story being told with hectic rhythms and lively reefs.