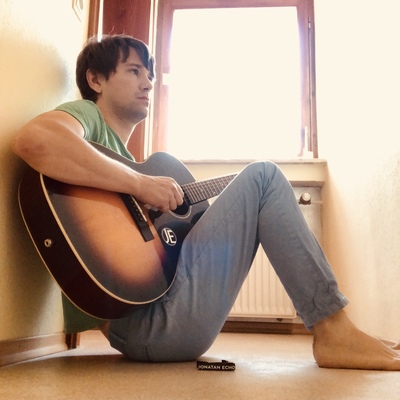 Indie, Zürich – Jonatan Echo, Singer-Songwriter (Dübendorf, ZH) Be on the way. Watch how buildings, insights and dreams are torn down and rise again. Losing... Read Biography

Be on the way. Watch how buildings, insights and dreams are torn down and rise again. Losing confidence and finding it again. Life is constantly changing, nothing stays the same. And you're in the middle of it. So what are you gonna do? Make darkness your friend. Look into the morning sun. Love. Capture moments and let thoughts flow. Go let kites flying.
With his first solo debut "Drache stiege la", the former Valium21 frontman invited the audience to travel through a world of emotions that ranged from the cold winter to the warm summer breeze. Thoughtful, hopeful, determined.
Eleven songs were created in a blue attic room at the end of 2015 - simple with acoustic guitar and vocals. "I felt like writing more acoustically oriented songs and then watching where it would go. The stories should serve as a starting point for everyone to immerse themselves in the moments that make up life.

In 2016-2018 numerous appearances have been made in living rooms, small bars and clubs, in the greater Zurich area, but also in Basel, Berne, Lucerne, or simply everywhere where people wanted to escape from everyday life for a while.

Meanwhile the work on new songs has started. In the next few months, the focus will be on songwriting and new recordings. In addition to guitars, piano and other sounds will be used. Who wants to shorten the waiting time for a new album can listen to the new songs "Bis du schlafsch" , "La los" and "Nimmerland" as a foretaste.

Registered since about 7 years
Last login on 29 November 2022