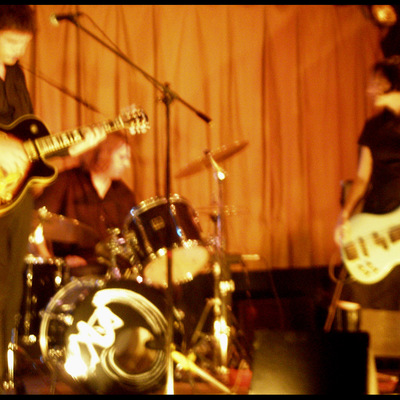 King Louis are back after 10 years.

King Louis are back after over ten years of radio silence. Nevertheless, the band never broke up. The trio with lead singer and guitarist Lee Schornoz, bassist Misses Frau Lehmann and drummer Charles Monroe rehearsed new songs, discussed whether this or that. There were concert requests again and again, but they were cancelled. In 2017 the trio produced new songs in Lee's own studio, in 2018 guitarist Silvio Riedo came on board as reinforcement.

The new songs complement the old concept perfectly: the dark death (in "Man In Black Coat Calls For Death") lurking on the street. Very fitting, because now, when probably every third wealthy hobby rocker invests his financial surplus in an expensive motorcycle and equipment, especially many fatal accidents happen. Further lyrics are about love pain (in "Wastelands"), misunderstanding (in "Just A Thought"), refugee and environmental problems (in "Exodus Unlimited") and commitment to being a rock musician (in "Good Luck After All").

King Louis, those were the Satanists with the censored, often creepy, violent and abysmal lyrics, the hellish trio with the popular devil's video produced by director Flo Wyss and the radio hit "You'll Die"? The band still plays these songs, of course, because there are quite a few fans who love these songs and certainly wouldn't want to miss them at the concerts.

But most of all it's still about the powerful music, now the new, not less distinctive songs have been added, which mate perfectly with the old ones. It's still this impetuous pressure, these dirty rock and surf guitars with open chords, the rumbling bass and the hugely played drums. It's the blues, this rawness and the angry and impressive voice of Lee Schornoz that make their own mark on this band's straightforward hard rock.