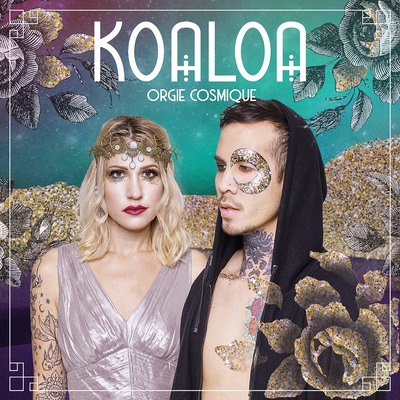 Deep Cosmic Folk Music, Bern – The birth of KOALOA was written in the stars. It’s the myth of the daughter of the French sky, and the son of the Cambodian sea. The legend says... Read Biography

The birth of KOALOA was written in the stars. It’s the myth of the daughter of the French sky, and the son of the Cambodian sea. The legend says when the two royal souls from the foreign galaxies meet, their destiny is sealed. They breathe life for the very first time. Their love so deeply, their love so true. Against all odds brought forth by their empires, they have to fight. But if love rules their heart, they feel the magic of darkness and light. So they leave the old world behind and find the gate to a new one, to their new home – their Kingdom of Dreams.

2012 – In the year of the dragon, the myth of KOALOA becomes reality. French singer Melanie Besançon and Tattoo-Artist Keo fall in love. And – their two worlds collide as well. It’s a hopeless fight against old traditions. But in the shelter of the Swiss mountains, they find their gateway. Driven by their passion for music they stick together, and they become one. It’s the birth of the band KOALOA. “The very special thing in our music is the perfect common energy and harmony that we create together. Our french lyrics wrapped by our cosmic indie-folk style is a deep dive into emotions with a high spiritual connection. Our main message revolves around love – self-love as a whole - in the shadows and in the light. The possibility of bringing others to our kingdom. A world of unconditional love. Here, there is no border between dreams and reality.” (KOALOA)

In 2018, the world of KOALOA started to grow when the Swiss independent label Sophie Records signed the Duo. Record Producer Luk Zimmermann (well known for his work with such acts as Lunik, Mich Gerber, Tobias Carshey, etc.) heard great potential and decided to join the magical team. “I’ve worked with many great artists in the last 25 years. But I’ve never heard French-spherical-electro songs in such an intense and sincere way. KOALOA’S music and the story of these two lovers touch my soul very deeply” Luk says in reflection.

The legend says the stars of KOALOAS future will shine bright as long as they follow their dreams. And they do. Their emotional EP Orgie Cosmic is coming out in september 2019, and will take their listeners into to the kingdom of dreams: “Pour toi j’aimerais décrocher la lune. Pouvoir t’envelopper dans ma brume” – “For you I would like to win the moon, to be able to wrap you in my mist.” (Lyrics from the song La Femme Patchwork)

Registered since over 3 years
Last login on 25 September 2019