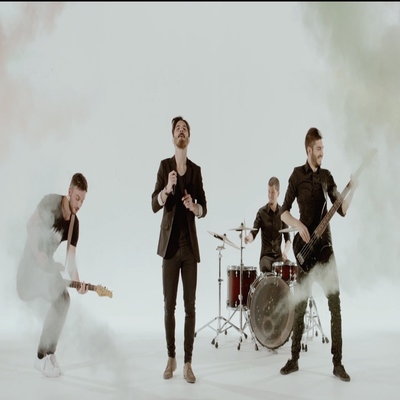 The band’s early music was a blend of modern indie rock and classic rock influences, but it has gradually expanded throughout the years to include a variety of genres (alternative rock, funky, disco, soul) and a more arena rock sound.
After a few changes in the line-up (Patrick and has joined the band at the end of 2014), Kolumbia have significantly enriched their music, from the sound to the songwriting, and their live shows. The main band line-up consists in the four members, and a session keyboardist.
Since the band has started to perform live (2013), and thanks to the sound obtained, they have achieved a good reputation and a remarkable recognition: the band performed on several national TV and Radio programs, and in important stages.
Despite the big changes occurred during the two years, the band has definitely achieved an important role as one of the leading players in the local area.
The innovative approach to arrangement, songwriting, and lyrics is one of the main reason why the band has chosen to work on their projects mainly with local young and talented players, directors, and technicians.

Since winning the 1st place at the “Palco Ai Giovani 2015” contest, the band has not only attracted the local medias attention, but it has also become one of most promising and exciting new acts. Kolumbia have recently released “Switch” as first single - and official video - of the following EP, which release is expected on the end of July. They are now ready to move forward.

Registered since about 8 years
Last login on 22 December 2016