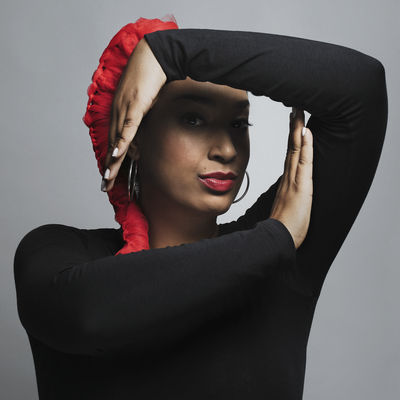 LA NEFERA derived from "Nefertiti", the Egyptian queen, means "The beauty has come". Born and raised in the Dominican Republic, this multifaceted committed musician has always preserved a piece of her culture. With her empowerment rap, LA NEFERA has long been known in the scene as the "Latin Rap Pharaona of Switzerland". As front woman of various band formations such as LA NEFERA, KALLEMI or ERROR 404, she has already entered important stages all over the world from Germany, Canada, Mozambique, England to Palestine. But also in Switzerland, the Basel native can look back on numerous notable concerts with her live band, including the OPENAIR ST. GALLEN, ROCK OZ'ARÉNES, ZERMATT UNPLUGGED or the OPENAIR BASEL. In her music the rhythms of her Latin American culture of origin merge with hip hop and electronic sounds. With this mixture, her social commitment and her media presence, the rapper has won the BASEL POP AWARD in 2018 and got airplay and rotations on various Swiss radio stations, including SRF VIRUS and SRF 3. Together with the Bernese DJ and producer OXIDIX and her band, consisting of sousaphonist VICTOR HEGE and percussionist ALBERTO GARCIA NAVARRO, she is announcing several single releases this year. These give a first taste of the upcoming EP (release date: spring 2021).