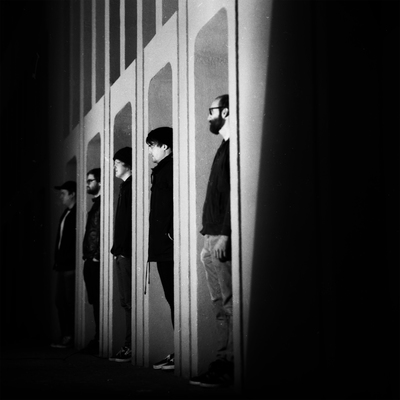 Rock, Basel-Stadt – Founded in 2010, this Basel-based quintet uses music from the post punk era as a melting pot for other musical influences such as noise, grunge,... Read Biography

Founded in 2010, this Basel-based quintet uses music from the post punk era as a melting pot for other musical influences such as noise, grunge, post rock, psychedelic rock and shoegaze. This fresh approach results in very unpredictable, surprising and multi-layered songs, a lot like the branches of an old, skew-whiff tree in the foggy twilight. With the second EP DISTORTED REFLECTIONS (2014) the band has found the way to their truly own sound. This has been rewarded nationwide at the M4Music Demotape Clinic 2015 with a place among the three finalist in the rock category.
The first fully-fledged album BOKEH (release date 8.4.2016) is the result of the consistent commitment by the band to their own musical path and thus is a highly manifold and dynamic record which still manages to transport the energy of their ecstatic live shows.

“Lots of guitar in minor, on the level singing, gloomy psychedelic wave, plenty of bass and a dark, angry 80s influence. No slabbing on the whole album, everything is good. “Distorted Reflections”, an absolutely entertaining mixture of post punk, gothic, shoegaze and alternative rock.”

"L’ARBRE BIZARRE: The sound of this quintet may indeed be compared to the beauty of a gnarled old oak tree; a fascinating oeuvre with lots of unpredictable turns, whose roots lie with the dark Velvet Underground as well as the cranky Pavement. An insider’s tip!"

"L’ARBRE BIZARRE will fill the room with obscurity. This Basel-based band pays respect to the post punk era but manages time and again to break out of darkness with the help of violins, post rock parts and a bright voice."

"L’ARBRE BIZARRE do definitely not tick like the much stereotyped Swiss watches, but from time to time they let one second disappear in order to stretch the next one. So there are rough corners and edges and this is good that way."

"A hint of americana, a pinch of retro, not too little new wave and not too much optimism – it’s like Velvet Underground have written the score to a French film noir. This tree (l’arbre = tree) may look bizarre but it creates fascinating sounds."