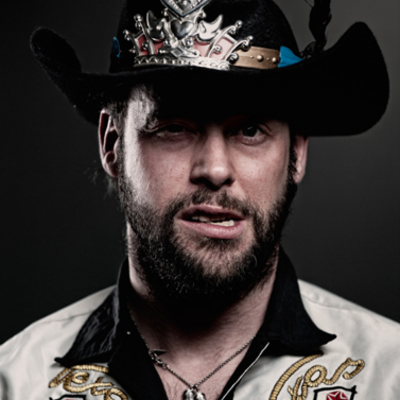 Larry Bang Bang, the legendary Cowboy from Salami/Texas, plays international Country-Trash and beyond.
Always curious to taste exotic influences and pick up new languages, he travels around the world; playing clubs and festivals and collaborating with local Artists - fulfilling his delicate mission as a contemporary "Import-Export Mariachi".

An experienced Entertainer and Freak-Pop Artist, Mr. Bang Bang tells unmatched stories about mesoamerican animal discos, brokenhearted swiss smalltown terrorists and psychedelic adventures in the jungles of Indonesia. A typical song may consist of some sarcastic lyrics embedded in a catchy feel good tune and garnished with some outstandingly odd instrumental moments.

An eclectic Album has recently been recorded in Australia and produced by Olifr M. Guz in Schaffhausen and is ready soon to be published and hit this gloomy world to spread Larry's color- and soulful word.

After appearances at the Melbourne Falls Festival, Off the Radar Festival in New Zealand, Fusion-Festival Berlin and many others, Larry Bang Bang and his Güeros are keen to play more shows around Switzerland and Europe in the upcoming season.

Registered since over 5 years
Last login on 19 August 2018