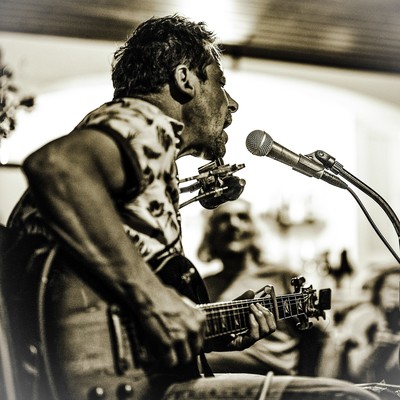 Blues, Fribourg – Little JC, otherwise known as Jean-Claude Bovard, has been an active member of the European blues scene since the mid-80s when he formed his first... Read Biography

Little JC, otherwise known as Jean-Claude Bovard, has been an active member of the European blues scene since the mid-80s when he formed his first blues band. He has been performing and playing for more than 30 years, either with his group, as a solo performer, or accompanying renowned American artists such as Louisiana Red (who gave him the nickname “Little JC”), Big Time Sarah, Eddie C. Campbell, Tommy McCracken, Matthew Skoller or Rock Bottom, to name a few.

Little JC developed his music greatly through his work with the legendary Louisiana Red, with whom he toured for more than 14 years. Three CDs that earned high accolades from the specialty music media have allowed Little JC to play at a number of festivals and prestigious clubs: Piazza Blues Festival, Lucerne Blues Festival, Blue Balls, Bierbeek Blues, Sierre Blues Festival, Vully Blues, among other festivals, and clubs including Fri-Son, La Spirale, Ebulition, Banana Peel, Crossroads Café, and Cricketers. Singer, harmonica player, guitarist, drummer, Little JC is one of the indisputably great European blues artists, when speaking of “real” blues that come from the school of life. That gives him a special dimension immediately recognizable from the complex depths represented in his music. Without inauthentic or unnecessary embellishments, there is just blues – true, sincere, believable, straight from the heart and soul.

Either with a band or solo, Little JC will bring alive strong musical moments, genuine and full of emotion!